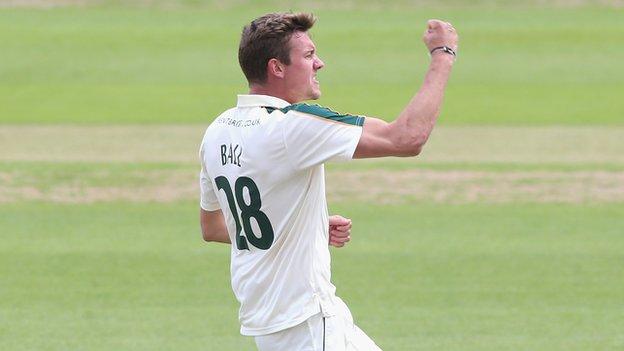 Nottinghamshire fast bowler Jake Ball starred with both bat and ball as his side pressed home their advantage on day two against Warwickshire.

Ball then struck twice as Warwickshire closed on 100-4, exactly 500 behind.

Laurie Evans is still there on 39, supported by Tim Ambrose (18).

Earlier in the day, Ambrose's fellow former England wicketkeeper Read went past 50 for the eighth time this season before reaching the landmark of 15,000 first-class runs.

But the highlight was the last-wicket partnership which saw Ball, aided by Harry Gurney's 10-ball duck, add 40 from only 16 deliveries, which included a maiden.

Ball, who hit four sixes and six fours, blazed his way to a career-best score off 20 balls but was left stranded one short of his 50 when Gurney's stumps were rearranged.

Warwickshire were soon reduced to 10-3 in reply, as Ball, with two wickets, and Luke Wood, with the other, put them under early pressure.

Sam Hain was then fourth to go, failing to make the most of being dropped by Alex Hales in the gully by then nicking Gurney into the safer hands of Stephen Mullaney at second slip.

Evans offered dogged defiance in the final session, which was broken up by two short stoppages, adding an unbroken 59 with Ambrose. But the Bears ended the day still requiring a further 351 to avoid the follow-on.

"It was nice for us to get some runs on the board and come out and put Warwickshire under some pressure with good, tight bowling from myself and Luke Wood.

"When Chris Read was there I was looking to bat for a bit of time but, once he got out, I thought I'd see how many I could get, in as little time as possible.

"Luckily for me it came off and it was nice to get a few runs. It was just my day and I seemed to get a few out of the middle of the bat."

"That was a tough day but full credit to Notts, they played some good cricket and put us under pressure.

"We've done that to them over the past few years so I guess we know what it's like to get on top of a team. Things like edges tend to happen far more regularly when you are that far behind in the game.

"We've got to scrap hard. It's still a good wicket to bat on but the odd ball does a bit."