England need to win all three remaining games of the series to retain the Women's Ashes after Australia clinched the Test by 161 runs.

Starting the day on 90-4, Australia reached 156-6 before declaring for the second time in the match.

England were quickly reduced to 29-5, with Sarah Taylor out for a second consecutive duck.

Australia seamer Ellyse Perry took career-best figures of six wickets for 32 runs, including removing Greenway and Laura Marsh with consecutive balls, as England collapsed from 80-6 to 101 all out.

It means Australia are now up 8-2 on points in the seven-match series, with three Twenty20 matches remaining that are each worth two points to the winner.

Ashes holders England can no longer win the series, but they could secure an unlikely draw by winning all three T20s.

With the 263 runs required for victory an unlikely target, England's main task was to survive 89 overs.

In a repeat of the first innings, Sarah Coyte trapped Heather Knight lbw to bring Taylor, arguably England's best batter, to the crease.

Taylor, looking for vital runs after struggling with the bat during the series, survived only five balls as she played a delivery from Perry on to her stumps for a second duck in the Test.

Scraping through to lunch on 16-2, Charlotte Edwards was caught behind off the first ball after the break from Perry to start a collapse to 29-5.

Greenway defended stoutly, with 128 dot balls from the 137 deliveries she faced, before a devastating spell from Perry sent England tumbling to defeat. 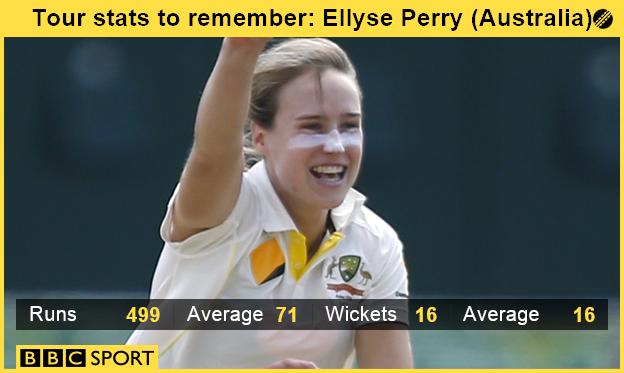 Australia's Jess Jonassen was the only player to pass 50 in the match, her effort seeming even more impressive given England's struggles on the same pitch.

Edwards' side were incapable of coping with the brilliance of Perry, who took Greenway's wicket in bizarre fashion as the English player attempted to duck out of the way of a short ball only for it to stay low and clip her leg stump.

The wicket was part of a majestic spell that saw all-rounder Perry take four wickets in 20 balls for just eight runs.

England's meek demise against arch rivals Australia left much to be desired - as they lost their second consecutive Test since becoming a fully professional side.

And ex-England batter Ebony Rainford-Brent believes the hosts lacked the resilience in their batting to ever have had a realistic chance of drawing the match.

"The manner in which England rolled over today, in particular with the batting, hasn't shown enough fight," she said.

"They are going to feel the pain of this because the way they have approached the match just hasn't been good enough.

"Australia adapted to the match situation much quicker and their captaincy was much more dynamic, aggressive and inventive - whereas England looked like it was a pre-planned process.

"I think the players need to find some guts and fight for the country and to turn themselves around in a week mentally is going to be a tough challenge."

Verdicts of the captains

England captain Charlotte Edwards: "It's really disappointing. I thought at tea time we had a sniff of holding on. We simply weren't good enough over the four days.

"We're not delivering as a batting unit. There's poor shot selection, but it's not through lack of trying. We're not learning quickly enough.

"It's down to the players, not the coaches. There are world-class players not delivering.

"We're going to fight to the bitter end. A change of format might be able to help us express ourselves."

Australia captain Meg Lanning: "This Test match was massive for us. We knew it would put us in the box seat.

"Winning the Ashes is the one thing that we haven't been able to do in the last five years. We came here really confident.

"England are a class side and they've got players there who can win games. We'll have to play well to win the T20s.

"Jess Jonassen was batting on a different deck to the rest of us, so she was certainly a big difference in this game. She's one to watch."