England face a fight to win the Ashes Test after Australia built a large lead on a rain-hit third day at Canterbury.

The tourists added 90 to the 106-run advantage they had after bowling out the hosts for 168 on Wednesday.

Australia then fell to 51-4 but Jess Jonassen's 29 not out steered them to 90-4, 196 runs ahead, when another downpour ended play early.

Debutant Jonassen, who made 99 in the first innings, hit the first six of the match and three fours as she looked to take the game away from the hosts with only one day remaining.

England are trailing 4-2 in the multi-format Ashes series, with the winners of the Test earning four points.

If Charlotte Edwards's hosts do lose, they will need to win all three Twenty20 matches to retain the Ashes.

In the 30 minutes of play possible before rain curtailed the morning session, Brunt reduced Australia to 2-2 in a spell Test Match Special commentator Jim Maxwell described as "Botham-esque".

Having performed brilliantly in the first innings for little reward, Brunt gave England the perfect start on day three with Villani bowled on the fifth ball of the day. She then trapped captain Lanning lbw in the third over with a ball that swung back.

A fiery, aggressive fast bowler, Brunt was deployed to open from the Nackington End for the first time in the match.

"She is very strong, bowls as fast as anyone in the game and brings an energy to the game that is refreshing and enlivening for the team," added Maxwell.

"What I like is not just her bowling but also her belligerence that gave England's innings a little bit of a sting in the tail."

Brunt was in a hostile mood and all of the England players had plenty to say to their opponents - so much so that vice-captain Heather Knight lost her voice.

Just as England began to assert their authority, the skies blackened and moments after the players had gone off for the first time, lightning and stomach-churning claps of thunder surrounded Canterbury.

Jonassen a star of the future

As Jonassen again walked to the crease with her side in trouble, the 22-year-old produced further proof she is a future star of the Australian side.

Jonassen played fearlessly, twice coming down the pitch to Laura Marsh during her innings, hitting the spinner for a four and a six.

"You forget she is only 22 and every time I see her play in a tournament she impresses in another way," said former Australia batter Mel Jones.

"It's the beauty of sport; you go through different cycles and at the moment she is in scintillating form."

Jonassen's eagerness to get bat on ball was in stark contrast to that of her partner Alex Blackwell, who was searching for runs.

The pair found themselves at the crease together after Anya Shrubsole had Ellyse Perry caught behind for 13 in the first over after play resumed. Nicole Bolton then lobbed a simple catch to Brunt at cover off Kate Cross after making 25.

Blackwell was reprieved by the TV umpire on nine, when a sharp catch at first slip by Knight was deemed to have been grounded, Jonassen's flare and exquisite timing ensured Australia remained in a commanding position.

'Passion in the changing room'

Brunt said she was "not one to be cool, calm, collected and smile".

"I want to get geed up for it and get the adrenaline going to the point I feel like I can bowl as hard as I can," she added.

"There is a lot of passion in the changing room, we realised that we put ourselves on the back foot with the bat and we wanted to come out and turn things around and that is exactly what we have done.

"Every bowler will tell you it's all about rhythm and timing. When you feel that you feel you can bowl for a long period and take a lot of wickets, so coming off was quite frustrating.

"There will be a lot more positivity from us batting in the second innings.

'There won't be an overnight declaration'

"I was saying to my dad after play that, when we were 3-30 and Brunt was steaming in, I just took a moment and thought: 'This is Test match cricket at its best'."

"It was really good to have Alex Blackwell and I to come together and try and get that feeling of 2 v 11 out there," she said.

"But that's some of the best bowling I've faced in my career and Brunt and Shrubsole are two world-class bowlers.

"We'll be looking to come out in the morning and continue batting, there won't be an overnight declaration." 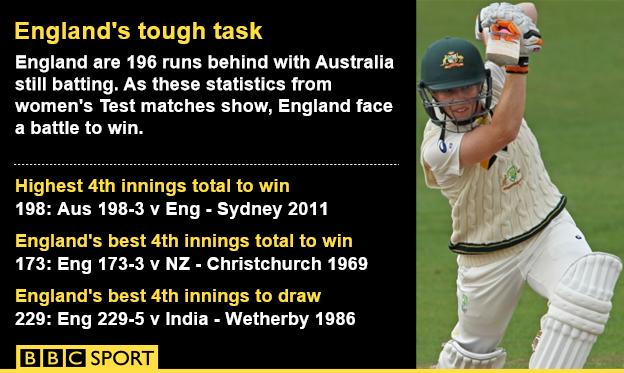