One of the wonders of England's 3-1 Ashes triumph this summer is that it emerged from such carnage: that ghastly 5-0 Pomnishambles in the preceding series 18 months ago, the second whitewash Australia had inflicted in three Ashes series down under.

That itself followed a 3-0 win for England the summer before, part of a run that has seen them win four consecutive Ashes series at home for the first time since the 19th century.

To think Home and Away used to be so popular. Ashes cricket, supposedly the fiercest contest the sport can offer, is in danger of becoming dangerously predictable.

In the 14 years since Australia last won in England, only one of the eight Ashes series has been won by the touring side.

It is a significant twist in the longest running rivalry in international cricket. In the 14 years and seven series before that, more than half were won by the away team.

The long-term numbers back up that dramatic trend. Prior to 2002, according to Test Match Special statistician Andrew Samson, 117 Ashes Tests were won by the home team, 98 by the away team. That's a win/loss ratio, in games that saw a result, of 1.19.

A little of that reflects the decreasing number of draws as Test cricket has speeded up. Before 2002, draws accounted for 29% of Ashes contests; since then, only 18%.

Much more it reflects more serious concerns: the inability of players, particularly batsmen, to adapt their game to the different conditions overseas; the lack of time and opportunity today's short tours give them to even try; the increasing temptation to win an advantage before a ball has even been bowled by producing pitches designed to favour your own skills rather than an even contest. 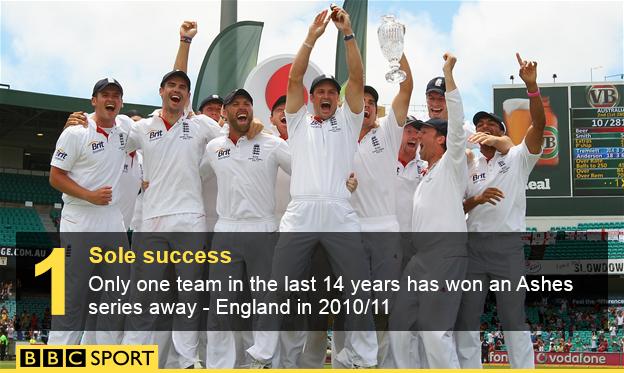 "For me it is quite simple," says Graeme Swann, part of the only Ashes team in those 14 years to win an away series. "In England the wickets are getting slower so the batsmen are not being exposed to fast bouncy wickets. When they go to Australia it is a culture shock. They can't deal with these guys with raw pace on fast, bouncy wickets.

"Then, when you come to England and the ball still swings, even the visiting batsmen that play county cricket don't face the highly skilled swing bowling they do in Tests. Batsmen don't like the ball moving laterally through the air. It is bad enough when it is jagging about off the pitch.

"The Aussies come here and nick everything. We go there and get bumped out. That is it in a nutshell."

Modern tours, designed to maximise revenue rather than ease players in, are shorter than ever before. Test series rattle past with back-to-back matches rather than pausing for other contests to allow players to refine and practise technique.

This summer, Australia began with just two three-day matches, both against weakened Kent and Essex sides. Once the Tests began, a mere fortnight after their arrival, they then had only one more three-day match before the series was decided at Trent Bridge.

In that tour match against Derbyshire only five players who would make the team for the next Test at Edgbaston were picked, because the others - after back-to-back Tests in Cardiff and at Lord's, and with back-to-back Tests to come in Birmingham and Nottingham - needed rest and recovery.

In England's hammering in 2013-14 there was even less respite. There was only one other tour match once the Test series had started, a meaningless two-day tourist trip to Alice Springs to play a scratch side that included a 16-year-old, on a pitch that bore no resemblance to the ones where Mitchell Johnson and Ryan Harris were rattling them out in the Tests.

These are tours barely recognisable to the recent past. In the summer of 1989, when Australia won the Ashes in England to begin a run of 16 years without a series defeat on English soil, they played five three-day county games before the series began and another nine interspersed between the six Tests.

How much easier to pass an exam when you attend that many tutorials first.

Neither was that an unusually long tour. Australia's next Ashes tour in 1993 saw them arrive in May and leave in September. The first ball of the Test series was bowled on 3 June, and the last two and a half months later on 23 August.

The entire 2015 Test series can, even if The Oval Test bucks the summer's pattern and goes the full five days, last no more than seven weeks from start to scheduled final day. There are five Tests in this series rather than the six of 1989 and 1993. Yet this time the tourists rocked up in late June and will play their last day of first-class cricket with at least a week of August still to go.

It is less a learning process than a frantic cramming. And that's if you actually want to adapt techniques.

On this tour, Australia's batsmen have continued to play attacking shots even as conditions at Edgbaston and Trent Bridge demanded something entirely different. Neither is this a one-off. They were hammered 4-0 in spin-friendly conditions in India in 2013, and then 2-0 by Pakistan on dead wickets in UAE in 2014.

And they are not alone in failing to understand how to adapt for different surfaces. In the 13 Tests England have played on the hard, bouncy tracks of the Waca in Perth, they have lost nine and won one.

"It's not easy playing away but it's something we have to get better at," Cricket Australia CEO James Sutherland admitted after the defeat at Trent Bridge at the weekend. "We want to be the best cricket team in the world and to do that we have to be better at playing away."

Because this is not just an Ashes issue. Test cricket across the world has the same problem.

As the table indicates, Test cricket is becoming weighted in favour of home sides like never before.

"It is like when Australia play in India and vice-versa - that's very one-sided too," says former Australia fast bowler Glenn McGrath. "Batsmen learn to play in their own conditions and struggle to adapt.

"In Australia the wickets used to have their own character so you had to adapt. Now every wicket is the same, so the batsmen get used to playing on one type of wicket and aren't challenged by another type."

Sydney is no longer a spinner's paradise. The MCG uses drop-in pitches. Adelaide is increasingly primarily an Aussie Rules venue. The Gabba at Brisbane is flatter than ever before.

"As soon as they face another wicket they can't adapt," says McGrath. "But that is the difference between a good and great player: being able to adapt."

It is changing the dynamic within individual series too.

Eighty-three Test series have been completed since the start of this decade. Just over 50% (42 series) have ended in a whitewash, where one side has won every single match. 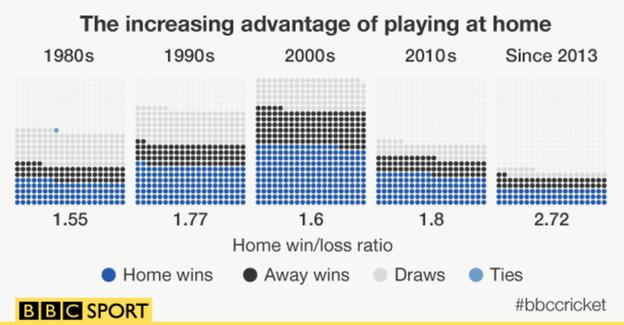 This partly reflects the rise of the two-Test series. It is also a serious concern for the game.

England's next series comes against Pakistan in the UAE. On their last trip there in the winter of 2011/12 they were whitewashed 3-0, having that summer themselves whitewashed India 4-0.

Test cricket is about cut and thrust. It is at its best when each side, with their own idiosyncrasies, comes together on a surface that offers both the prospect of reward for application and accuracy.

When there is cut but no thrust, when the outcome feels inevitable, it is a weaker contest and a weaker sport. Who wants to watch a procession?