Ben Stokes took five wickets to put England on the brink of regaining the Ashes at a jubilant Trent Bridge.

The hosts declared on 391-9 after Joe Root's 130 and a rapid 58-run partnership between Moeen Ali and Stuart Broad on the second morning.

But Stokes produced some magnificent swing bowling either side of tea to post figures of 5-35 and reduce the tourists to 241-7, still 90 runs behind England, when bad light ended play.

Adam Voges will resume on Saturday unbeaten on 48, but it is surely only a matter of time before England wrap up the series by taking an unassailable 3-1 lead with one match to play.

An England victory would avenge the 5-0 whitewash down under in 2013-14 and extend Australia's winless run on UK soil to four Test series.

With Australia's openers gaining in confidence with every crunching drive, England needed an inspiration, and Stokes was the man to deliver.

Swinging the old ball both ways in a brilliant spell from the Radcliffe Road End, Stokes took three quick wickets to ignite the Trent Bridge crowd.

Rogers edged an away-swinger, Warner top-edged a pull to mid-on and Shaun Marsh prodded to third slip for two.

In the space of 13 balls, Stokes had taken as many wickets as he had managed in his previous seven innings of bowling and, for the second successive Test, raised the prospect of an England victory inside two days.

Even though Voges and Peter Nevill saw through 17 overs to all but see off that danger, Stokes had Nevill lbw and Mitchell Johnson caught by Alastair Cook off a devilish late away-swinger to put England within three wickets of glory. 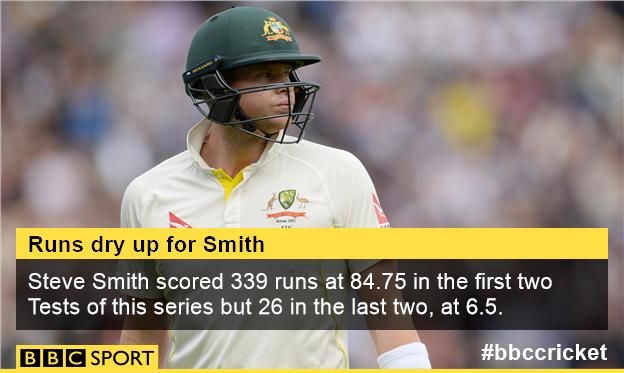 Steve Smith's 215 at Lord's had appeared to validate his position as the world's top-ranked batsman, but his form has deserted him ever since.

A reckless drive to short point saw him fall for five, giving Stuart Broad his ninth wicket of the match and leaving Smith with only 26 runs in his last four Test innings.

If Smith's form has been patchy, Michael Clarke's has been pitiable.

The beleaguered Australia captain barely attempted an attacking shot as he cobbled together 13 runs off 37 balls before pushing hard at a ball from Wood outside off stump.

The edge flew to first slip where Cook parried it, before pushing it back up in the air to allow second slip Ian Bell to claim the vital catch.

One of the features of England's performance on day one was their breathtaking catching as eight chances were all snapped up by the slips. Friday was a different story as errors crept into their game.

Warner had two reprieves on his way to his fourth consecutive second-innings fifty of the series. Cook missed a routine slip chance to remove him for 10 and Bell shelled a tougher one when the left-hander had 42.

The opening partnership had passed 100 when Rogers was given a let-off. Brilliantly caught at third slip by Root off a fierce Mark Wood bouncer, he was recalled when replays showed the pace bowler had marginally overstepped.

Later in the day, as England pushed for their sixth wicket, Steven Finn was guilty of the same transgression to let Nevill off after he had edged to slip for two.

England wobble … then rally … then declare

After what Broad had described as a "perfect" first day, England were given a reality check by Mitchell Starc on Friday morning.

The left-arm paceman, whose place had been under scrutiny following an underwhelming performance at Edgbaston, removed Root, nightwatchman Wood and Jos Buttler with some fast swing bowling to finish with a Test-best haul of 6-111.

When Stokes fell for five, England were 332-8 but for the third time in the series, a lower-order counter-attack from Moeen and Broad rallied the hosts.

They put on 58 runs in 7.3 overs to dampen Australia's spirits, affording Cook the luxury of declaring soon after the ninth wicket fell and putting Australia in before lunch.

The day in numbers 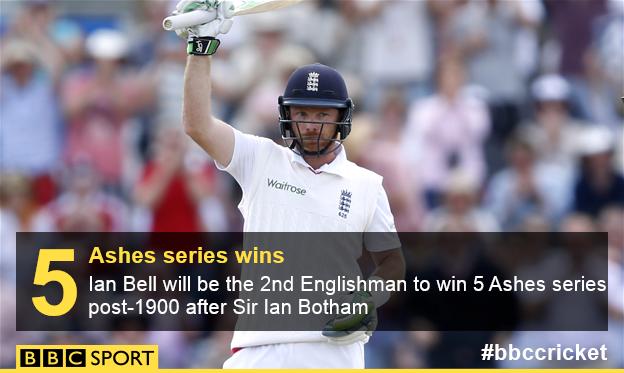 And finally... the millionth ball in England

The second ball of Stokes's second over in the Australian second innings was the 1,000,000th legal delivery bowled in Test cricket in England.

As if to join in with the celebration of this milestone, Australian opener Warner punched it down the ground and past mid-on for four during that opening stand of 113.