Australia, all out for 60 in 18.3 overs. Stuart Broad, eight wickets for 15 runs. All of it done with 20 minutes to go until lunch on the first morning of an Ashes Test. There are no missing characters in this paragraph, although there are plenty in this Australia team.

This has been a series on fast-forward, yet even by the standards of a nonsensical summer this was a morning that felt like watching the trailer rather than an actual film.

The shortest first innings in Test history. Only two players making double figures. Extras the leading scorer for the first time in an Ashes contest.

England supporters were in real danger of forgetting their own names, never mind the identity of their team's missing fast bowler. Only three times in Test history has a team bowling first been batting before lunch on the first day.

How embarrassing was it for the old enemy? Lunches themselves have lasted longer. Hell, so have cups of coffee.

Australia would have been mortified had the top score by any of their players had been 60. Had any single batsman not lasted for 111 balls there would have been questions about the team's attitude and technique.

Instead they lost their first three wickets inside the first eight deliveries.

After 20 minutes their scorecard read 0 0 6 0. That's the international dialling code for Malaysia, so if the rest of your number is 10 1 2 13 1, you might find yourself receiving some unusual calls.

Pity the person with tickets who stopped en route to Trent Bridge to pick up a paper or grab a sandwich for later. The first over alone saw 10 runs scored and two wickets fall, which felt like the entire daft series summarised in six deliveries until you saw what happened next.

These Ashes are not simply racing past at unprecedented pace. They are accelerating. We are getting to the point when buying tickets for the third day is as much of a gamble as walking out to bat without pads.

Adam Voges - poor old hapless Adam Voges, a grand total of 74 runs in the entire series - could at least complain that he fell to an impossible catch; Ben Stokes's one-handed dive at fifth slip was every bit as extraordinary as Andrew Strauss's Superman effort to see off Adam Gilchrist on this same ground a decade ago.

Even then his shot was poor, but in a rogue's gallery like this, no witness could ever pick it out.

Chris Rogers went for the first duck of his Test career. He has now been out three times in the last five balls he has faced from Broad coming round the wicket.

Steve Smith was squared up, David Warner beaten through the gate. Those first three set a template that all would follow: playing too hard, playing too early, playing in a manner that spoke of disintegrating confidence and an inability to cope with the moving ball.

Michael Clarke? He fell to a shot that would have felt inexcusable had it been the morning of the second day and his team 300 up. It was not so much a captain remaining on the bridge as his ship went down as grabbing the last lifejacket and smothering himself with it. 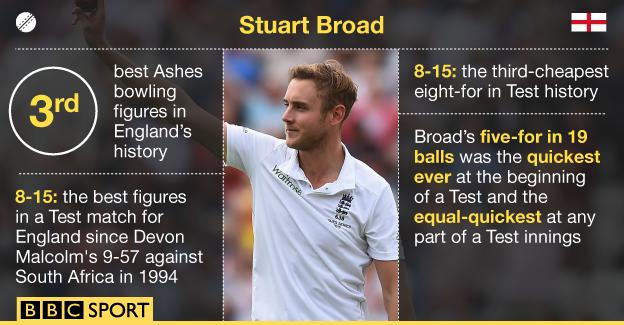 As you watched England's six slips crouching, as you listened to the joyously sarcastic standing ovation when the innings limped past 50, it was almost impossible to recall that this was a team who had handed out a 405-run thrashing less than three weeks ago.

Beaten by eight wickets in Birmingham last week, humiliated in less time than it takes for a Twenty20 innings a few days later. If this was cycling, the international governing body would be ordering spot-checks for motors in cricket balls.

For England's supporters it was wondrous stuff, perhaps only the dismissal of Australia for 98 on the first morning of the Boxing Day Test at the MCG in 2010 coming close in recent Ashes memory.

For Broad, on his home track, as the new leader of his country's attack, it was both a classic whirlwind burst and something entirely beyond those previous tornados like at Durham in 2013 and at The Oval in 2009.

Australia would take 8-15 as a score when the two nations meet again in the Rugby World Cup this autumn. Here those figures have surely cost them the Ashes.

They are the best figures by a fast bowler in any Ashes Test, home or away, and the best figures for England since Devon Malcolm's 9-57 at the Oval 19 years ago. Not since Sydney Barnes 102 years ago has an England bowler taken five wickets before lunch on the first day of a Test.

Somewhere there will be Englishmen bemoaning the speed of this match, wishing even on a subconscious level that Australia were acting more like the ultimate Test opponents and less like a bunch of hapless innocents.

Even with England's reply in progress it is worth reminding those neurotics of the myriad humiliations handed out in reverse in the last 25 years.

Eighteen months ago, Australia were thrashing Alastair Cook's team 5-0, an experience so miserable that the memory still brings a dread lurch in the guts of those Englishmen who experienced it.

The first session, Trent Bridge, 2015. Remember it forever, or at least until The Oval brings something even wilder and weirder.