England captain Alastair Cook wants a "fantastic anniversary" at Edgbaston in the third Ashes Test against Australia starting on Wednesday.

It is 10 years since the second Test of the 2005 Ashes at the same venue, which England won by two runs.

Cook said the famous victory could give England "inspiration in one way" after the "absolute disaster" of the 405-run second Test defeat at Lord's.

"It's almost a different atmosphere to anywhere else we play," Cook said.

England have won six and lost just one of their last 10 Test matches at the Birmingham ground and are looking to take a 2-1 lead in the series, having won the first Test at Cardiff.

"It would be brilliant to go 2-1 up, and it's certainly an inspiration in one way to know it's possible," Cook added.

"The crowd really get behind us here. If we get on top, we feel as if we've got an extra man playing for us because of the noise."

England seamer Mark Wood is an injury doubt for the third Test.

Wood, who has an ankle problem, returned match figures of 1-131 in the defeat by Australia at Lord's.

"He's played a huge amount of cricket in the last six months and we have to be careful."

Wood's injury troubles could pave the way for Middlesex fast bowler Steven Finn to play his first Test since the opening match of the 2013 Ashes in England.

"With the pitch, Finn will be pushing," Cook said. "He's been bowling well for Middlesex and in one-day cricket."

Yorkshire batsman Jonny Bairstow will come into the team at number five after Gary Ballance was dropped following the second Test.

Bairstow, who played the most recent of his 14 Tests in January 2014, has scored 980 runs at an average of 108.88 in Division One of the County Championship this season.

"Jonny has really banged the door down with his weight of runs," Cook said.

"We've found ourselves three wickets down on too many occasions over the last six months.

"It's a tough call on Gary but Jonny is raring to go."

Cook also backed under-pressure batsmen Adam Lyth and Ian Bell to return to form after a series of top-order collapses.

England subsided to 30-4 and 48-4 at Lord's, with Lyth and Bell contributing a combined 19 runs in four innings.

"Adam has got to play the way he's played for Yorkshire and stay true to his game," Cook said.

Bell said he had "not played to the best of my ability in the last two months", with just 117 runs in his past six Tests at an average of 10.63.

Former England batsman Geoffrey Boycott said it "could be the end" of Bell's career if he fails at Edgbaston, his 113th Test.

"You're always playing for your place. In any international team there's a huge pool of talent and good players who want to take your place.

"When you go through a tough time, you start looking over your shoulder.

"But when you're out there, you're thinking about the game situation. The idea is for the top three to lay a platform and put miles in the bowlers' legs."

'It's not the end of Bell's career'

"Bell's been a class player for a long period so I don't think moving up to number three is going to bother him too much," Clarke said.

"He has been extremely successful over a long period of time. Whether he makes runs in this Test or not I'm certain it's not the end of his career.

And former England captain Alec Stewart believes Bell should remain in the squad for the rest of the Ashes.

"People should be careful what they wish for," Stewart told BBC Radio 5 live. "A lot of people wanted Alastair Cook out of the side - now look what he's doing."

Wicketkeeper Bairstow, who will play as a specialist batsman, averages 22.9 in six Tests against Australia.

Clarke said: "I think Bairstow is a really good player. He's an attacking player who likes to play his shots.

"We've looked at footage, but he's in form and we'll have to bowl well.

"Having said that, I'd like to think the attack he's going to face is different to the attacks he has been facing in county cricket."

Weather forecast for day one

Rain is forecast during Wednesday's first day and on Saturday, which could see the morning of day four washed out.

However, BBC Weather says Thursday and Friday will be overcast with periods of sunshine, with a cloudy final day on Sunday. 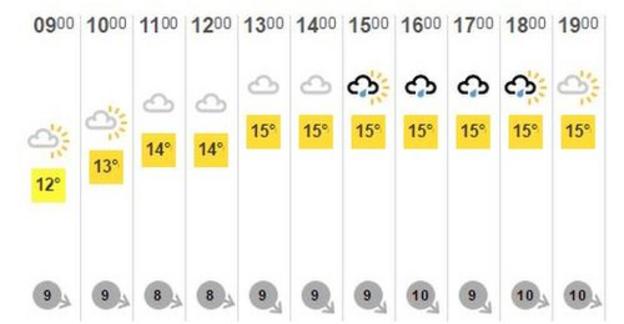 'A good batting track... but be selective'

The pitch at Cardiff for the first Test, which England won by 169 runs, was very slow and low, which helped blunt the quicker Australia seam attack.

The Lord's pitch was another good batting track but marginally quicker, giving the likes of Mitchell Johnson and Mitchell Starc more to work with, which they did to supreme effect in a 405-run Australia win.

"The Edgbaston pitch doesn't have a lot of bounce so it will be similar to Cardiff in that there won't be massive carry," cricket analyst Simon Hughes told BBC Sport.

"This will slightly nullify the Australian fast bowlers as they won't be able to get the ball whizzing through like at Lord's.

"There is a little bit of grass on it, which will help bowlers like Jimmy Anderson and Stuart Broad to get a little bit of movement sideways, which is so important to them.

"They are not the fastest bowlers but they are precise and the Australia batsmen are not particularly good at playing that.

"Basically it is a good batting wicket but one that you have to be selective on, judge the ball well and don't get carried away on. I would bat first, get runs on the board and the pitch will probably deteriorate a bit as the Test goes on."