Oman and Afghanistan have grabbed the last two places in next year's ICC World Twenty20 tournament in India.

Afghanistan overcame Papua New Guinea by six wickets with 10 balls to spare at Malahide, Dublin, to qualify for the event for the fourth successive time.

Oman then beat Namibia by five wickets at the same venue to qualify for their first major global cricket tournament.

The victory also means Oman have been granted Twenty20 international status by the International Cricket Council. 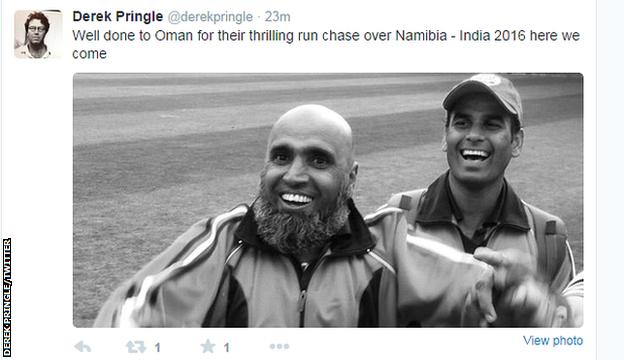 They joined the ICC as an affiliate member in 2000, gaining associate status last year, and can now look forward to their first appearance at international cricket's top table.

The 16 teams taking part in India have now been confirmed as the 10 Test-playing teams plus Scotland, Ireland, Hong Kong, the Netherlands, Afghanistan and Oman.

The World T20 Qualifier continues with ICC ranking points at stake - with Scotland meeting Hong Kong and Ireland facing the Dutch in Saturday's semi-finals, with the winners meeting in Sunday's final.

Oman and Afghanistan will face off for fifth and sixth place on Saturday.