England captain Alastair Cook described his team's batting display in their 405-run defeat by Australia as "not acceptable" and admitted the selectors may have to look at the make-up of the top order for the rest of the Ashes.

Australia bowled the hosts out for 103 on the fourth day at Lord's to level the five-Test series at 1-1.

England have now been 52-3 or worse in eight of their past 14 Test innings.

"That's not ideal in any circumstances in any team," said Cook.

"It's certainly something we'll have to look at over the next couple of days."

Asked to bat for five sessions on a flat pitch to seal a draw, England crumbled to 64-7 and were bowled out in 37 overs, with Stuart Broad's 25 the highest score.

Opener Adam Lyth, who made seven, has only passed 50 once in eight Test innings, while Gary Ballance and Ian Bell are both desperately out of form.

"Today was for them the icing on the cake but for us a real kick in the teeth," said Cook. "To get bowled out on that kind of wicket for 100 is not good enough, not acceptable and not up to the standard the guys can play." 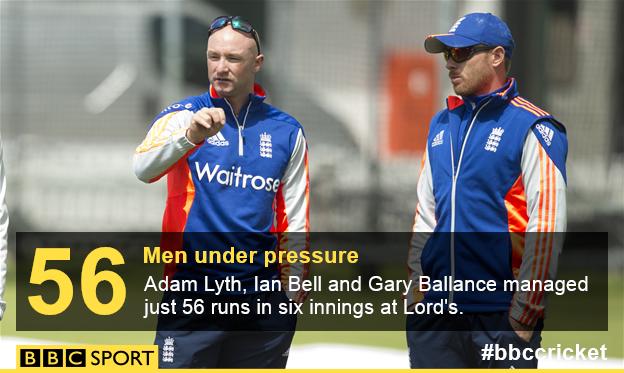 He is hoping the rest of the series will be played on pitches that assist England's seamers.

"We want to play on English wickets and that probably wasn't too English but that's nowhere near an excuse.

"We've been totally outplayed in four days. It's down to the side to play the cricket on whatever surface you are given."

The defeat continued a sequence that has seen England take the lead in their last three series, only to lose the next Test.

"The last three times we've gone 1-0 up in a series we haven't managed to play anywhere near the standard we set ourselves in the following game," added Cook.

"We cannot put our finger on it. We had an opportunity here to build on Cardiff and we haven't taken it.

"We've talked about it every time but next time it's not about talking, it's about playing."

England's selectors will meet on Tuesday to pick the squad for the third Test at Edgbaston, starting on 29 July.

With Nottinghamshire's Alex Hales and Yorkshire's Jonny Bairstow among the names under consideration, Cook said he believed there were players in county cricket capable of stepping up to face Australia's pace attack.

Australia captain Michael Clarke was delighted by the way his team rebounded from their 169-run defeat in the first Test in Cardiff.

"I couldn't have asked for a better performance," he said "We didn't play our best at Cardiff, but now we can look in the mirror and say we played some good cricket here.

"This sets a tone for us. It shows you the standard of cricket you need to be at."