Amid the doom and gloom of England's predicament in the second Test, the ongoing development of Ben Stokes provides a welcome chink of light.

His performances this summer have established him as a proper Test batsman. It was a great decision to move him up to number six and you can see the confidence that has given him.

Stokes was outstanding on Saturday. He was solid in defence but still positive and played good, well-controlled shots.

He deserved a hundred and looked utterly crestfallen when he played on off the bowling of Mitchell Marsh for 87.

When England took the field later in the day, Stokes was like a dynamo. He is whole-hearted and chases and dives after everything.

The one area where he is still a work in progress is his bowling.

He often gets compared to Andrew Flintoff, and he is probably already a better batsman than England's 2005 hero but he's some way off being the bowler Flintoff was.

At the moment he's a fourth seamer who still bowls a bad ball every over, but if he can work on his consistency without losing any pace, he could become a really top all-rounder.

If Stokes looked frustrated to miss out on a hundred, then Alastair Cook looked mortified when he chopped on for 96.

When he drove at a wide-ish ball from Marsh, he must have thought he'd struck a boundary, but instead the ball caught the inside edge and Cook was gone. That shows the tiny margins there are in this game. 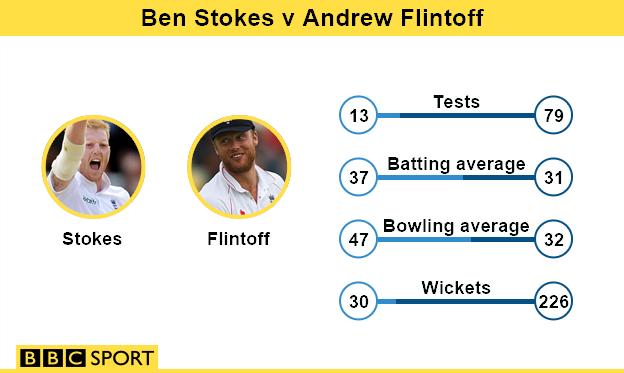 It was an excellent innings nonetheless, compiled using precisely the cautious-but-confident approach Cook adopts when he's at his best.

We've heard all about England's new positive style, and there were signs in Cardiff that Cook was trying to follow the trend by being more attacking, but this was the old Cook, and that's the Cook England need.

From the horrors of 30-4, England could not have done much more than reaching 312 all out.

Australia stuck to their task well, bowled mostly full lengths to attacking fields, and gradually chipped away at the England innings.

Marsh now has a real opportunity to cement his place in this team for a long time. He ran in with much more purpose than Shane Watson has been doing and looked like a bowler who wanted to take wickets.

Watson used to bowl ball after ball outside the off stump, which was occasionally effective, but his body language was poor in Cardiff and Marsh looks much more sprightly.

I wasn't at all surprised that Australia didn't enforce the follow-on. They might have thought about it if they'd blown England out in an hour and a half this morning, but the pitch is slow and flat so Michael Clarke needed to give his bowlers a rest.

England are likely to have to survive the best part of five sessions to save the game, but I see no reason why they shouldn't be able to do it.

The ball is not doing anything at all. It hasn't spun and even if it does spin it will do so very slowly and without bounce.

It's a slow, true pitch and there's no real bounce to terrify the lower order so if England play every ball very carefully they can save this match.

The safety-first approach won't come naturally to a lot of the current England players. Modern batsmen like to see scoreboard ticking along. There aren't many Geoff Boycotts out there who are happy blocking ball after ball.

But this Test is there for the saving. With a healthy dose of luck, allied to discipline and concentration, England could yet be heading to Edgbaston with a 1-0 lead.