Former England batsman Jonathan Trott fell 13 runs short of his first hundred of the season for Warwickshire on day two against Somerset at Edgbaston.

Trott, whose last century for Warwickshire came in September 2014 against Northants, struck 11 fours in more than three hours at the crease. 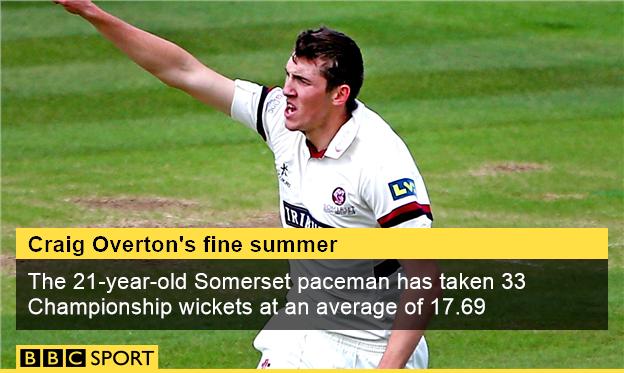 However, his dismissal and wickets of Tim Ambrose, Rikki Clarke, Chris Woakes and Keith Barker in the final hour mean the first-innings advantage is unlikely to be as large as it looked after tea.

Overton was the chief architect in the late collapse, finding some movement to get rid of Trott and then having Clarke and Woakes caught in the slips by Tom Cooper.

While wickets were tumbling around him, young batsman Hain stood firm in reaching his fourth half-century of the campaign, and will resume with Jeetan Patel (20 not out) on the third morning.

"The pitch is a little bit two-paced and hard to drive on and we unfortunately lost a few wickets to the new ball.

"But we are 50 in front with two very capable guys still at the crease so if we can extend this partnership and get the lead pushing on towards 80 or 100 that could be crucial.

"I have been a bit light of runs since I came back from my broken thumb and got a few starts without quite going on from them, but hopefully that is a good step forward for me today."

"Craig Overton and Alfonso Thomas were outstanding with the second new ball, but really those wickets could have come at any point in the day as the seamers bowled really well.

"Our attitude was top-drawer. Even when Warwickshire were 240-3 you could never have told from our body language and energy in the field.

"Now we have got to take the last two wickets quickly tomorrow and hopefully the wicket will start to turn more in the fourth innings."