When Australia captain Michael Clarke won the toss on the first morning of the Lord's Test, he could barely conceal his satisfaction.

After their chastening defeat in Cardiff, Australia needed to put together a solid batting performance and lay down a platform and they did all that and more on a flat, slow pitch ideal for batting.

Having reached 337-1, they are set up perfectly to bat England out of the match on Friday and push for a victory that would level the series.

I don't think England could have done a lot more with the ball. Stuart Broad was outstanding once again in conditions that offered him nothing.

This was a far tougher pitch to bowl on than the one at Cardiff. The surface there was equally slow, but the occasional ball would stop on the batsman or climb out of nowhere, meaning England could pitch the ball up and have men positioned for the drive.

At Lord's, the bounce was slow and predictable and the outfield was fast. Bowlers had to try things but when you are going for four runs from a defensive block it is pretty soul-destroying.

Mick Hunt, the Lord's groundsman, has worked so hard to get pace into this pitch over the last 10 years that there must be more than a suspicion that England have asked for all the surfaces to be slow in order to nullify Australia's pace attack.

Tactically, there is nothing wrong with doing that if they really do feel it's their best way of beating Australia, but it doesn't make for a very entertaining spectacle for the crowd.

Having said that, we don't want to see 10 wickets falling on every day of a Test match. That each contest is different is part of the richness of the game and I'm certainly not writing this match off as a dull, stultifying draw just because of what we've seen on the first day.

In some respects, England were fortunate that Australia didn't truly look to get after them today. Their approach was more centred on platform-building, making sure that they went into tomorrow in a good position.

The challenge for England will be not to allow things to slip away from them when Australia's more positive players come in and try to play shots. They will hope that Australia try to push on too quickly and lose wickets. If not, they will just have to keep their chins up and keep banging away.

When Australia come to bowl, their mindset will be different from Cardiff, when England were going after them in the first innings, and building on a healthy lead in the second.

This time, the tourists will have runs on the board, which means the likes of Mitchell Johnson and Mitchell Starc can afford to run in and give it everything.

Whether they can be effective on this pitch remains to be seen, but they will be straining every sinew to try to get Australia's Ashes campaign back on track.

My day got off to an inauspicious start when I got into a bit of trouble with the MCC for going into the pavilion without a tie.

When I headed down there to start the show I had intended to be broadcasting from the doorway, but it was so busy with members that I made the decision to dart into the Long Room.

It provided a great atmosphere as the members roared the players onto the pitch, but I should have realised that my rules breach would not have gone unnoticed. 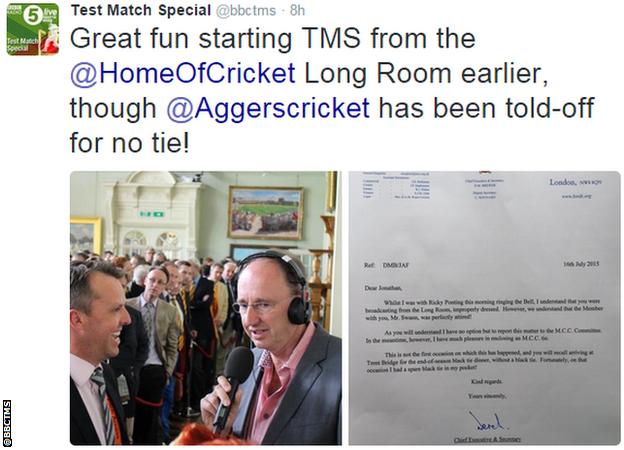 Later in the morning, I received an envelope containing a very funny letter from MCC chief executive Derek Brewer, as well as a tie.

He just wanted to remind me that rules are rules, just as Lewis Hamilton found out to his cost at Wimbledon on Sunday.