England's bowlers suffered a gruelling first day of the second Ashes Test at Lord's as Australia fought back from their heavy defeat at Cardiff with an imperious batting display.

Chris Rogers and Steve Smith both scored hundreds as the hosts reached 337-1 by the close.

Their partnership of 259 broke an 85-year record for Australia's second-wicket at Lord's, as Rogers made 158 not out for his highest Test score and Smith an unbeaten 129 after David Warner had squandered a promising 38 with a reckless shot.

On a day of few chances - Ian Bell dropped a low Smith edge at second slip - England's bowlers rarely lost their discipline but struggled to pose any consistent threat on a slow pitch offering almost no movement off the surface.

With the tourists now in a position from which to dictate the match, Alastair Cook's men face a major challenge to keep their series lead intact.

An Australia victory would tie the series and put Michael Clarke's side back on track to retain the Ashes.

Australia, who selected Mitchell Marsh and Peter Nevill in place of Shane Watson and Brad Haddin, have not won an Ashes series in England since 2001. 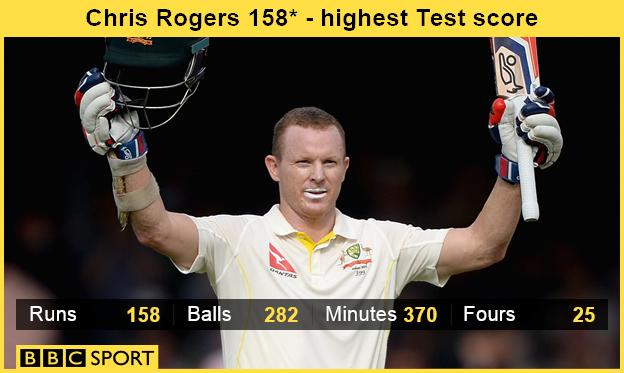 Rogers put aside the frustration of scoring seven consecutive fifties without converting a single one into a hundred by batting the entire day.

After surviving an early scare when he edged James Anderson's third ball past Joe Root in the slips, the left-hander used all the experience gained from four seasons at Lord's with Middlesex to punch, nudge and steer his way to three figures.

Opening his shoulders in the dying stages of the day, he peppered the boundaries at the famous arena to add 77 runs in the session between tea and the close, going past his previous Test best of 119.

Smith justified his status as the world's second-ranked Test batsman with a confident century of his own.

After labouring 111 deliveries for his first half-century, he needed only 50 balls for his second, steaming into the nineties with a straight six off Moeen Ali and bringing up three figures by pulling a tiring Anderson dismissively through mid-wicket for four.

His only false stroke, an edge off Stokes, flew low to Bell at slip. It was a difficult chance, but one which England desperately needed to be taken.

England's bowlers were always likely to struggle to match the near-flawless display they produced in Cardiff.

But they managed to avoid falling into the trap that caught Australia out in the first Test and remained disciplined throughout the majority of an increasingly frustrating day.

Stuart Broad picked up where he left off in south Wales as he probed on a full length and regularly beat the bat without reward.

Mark Wood took some time to adapt to the Lord's slope but also produced some unplayable deliveries.

James Anderson and Ben Stokes were slightly less consistent and were invariably punished on the occasions they dropped short.

The pitch - be careful what you wish for

At Cardiff, the slowness of the pitch played into England's hands at it nullified Australia's fast bowlers, and provided uneven bounce and movement for the home seamers later in the game.

If, as some suspected, England requested a similar surface at Lord's, the tactic backfired the moment Australia won the toss.

The pitch was equally slow but far truer than the one in Cardiff, allowing the ball to sit up and seemingly beg to be thrashed across the lightning-fast outfield.

"I'm not sure what England can do. They don't have a great spin bowler or a genuine quick bowler, although I'm not sure what impact that would have here," said Geoffrey Boycott on Test Match Special.

"They have got what they wanted, a flat pitch to negate Australia's quicks. They have probably done that but it's not easy to bowl out decent batsmen. That's the other side of the coin."

Wild Warner and the pork pies

Warner's innings featured a sudden acceleration from first gear to fifth and a humiliating crash landing.

Having taken 25 balls to reach the boundary, he then struck six more fours in his next 16 deliveries, including two off the first two balls of Moeen's opening spell.

Four balls later, the assault continued as Warner aimed another heave into the covers where a grateful Anderson took the catch.

Off trudged Warner, cursing himself, while Boycott quipped that pork pies had more brains than the Australia opener. Sadly for England, Australia's generosity ended there.

Australia's Chris Rogers on Sky Sports: "It's one of the proudest moments of my career. To get a hundred here is so special. I have a lot of support here, lots of friends."

Team-mate Steve Smith: "That was very important after Cardiff. The pitch was a little bit slow and if you got in you needed to go big.

"I wanted to make it count today and get up on that board. It was about keeping England out there for as long as possible."

England bowler James Anderson: "Hats off to the two guys who made hundreds - they played brilliantly throughout the day.

"They stayed patient, they attacked us when they could and made it really difficult for us to bowl at them for long periods of time and create that pressure."

Former England batsman Geoffrey Boycott: "I haven't seen anything yet that tells me this won't be good for batting when it's England's turn.

"But there's scoreboard pressure and we don't know if the ball will keep low and turn appreciably as it goes on."

As ever, the first hour on Friday will be crucial. England have a relatively new ball to use and must make early inroads into the Australian batting line-up.

If they don't, it could be another long day in the field with no respite from the weather, which looks set fair.

If Rogers and Smith get set again, the tourists will be eyeing 600 and putting real pressure on England's batting.

Quick wickets could at least keep England in the game with two debutants to follow Australian captain Michael Clarke and Adam Voges.