Warwickshire's batsmen struggled in tough conditions on a rain-hit day two against Durham at Chester-le-Street.

Chris Rushworth (4-39) picked up three quick wickets, including two in two balls, to leave the visitors on 12-3.

Rushworth removed Rikki Clarke before bad light brought an early close with the Bears on 167-7, trailing by 147.

With the start delayed by an hour, a couple of rain interruptions and play being called off at 17:40 BST, just 43.3 overs were bowled in total.

When play got under way, Rushworth utilised the muggy, overcast conditions straight away by trapping visiting captain Varun Chopra lbw with the second ball of the day. 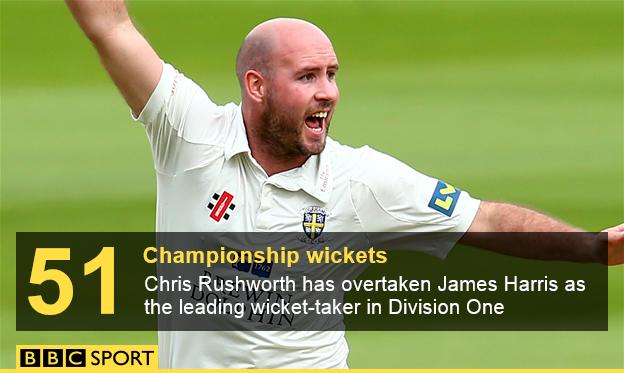 In his next over, the paceman found himself on a hat-trick when he removed Jonathon Webb and Laurie Evans, both leg before, but Hain survived the next ball by clipping it away to the boundary.

After further rain delays, Ian Westwood became the fourth lbw victim of the innings as he was dismissed by John Hastings, before Hain and Ambrose forged their fine recovery.

However, their good work was undone in the space of four balls when Hain was snaffled at short leg by Keaton Jennings off Hastings and Ambrose was out lbw to Durham skipper Paul Collingwood.

Clarke became the sixth leg-before victim of the innings just before the light closed in to give Rushworth his 51st wicket of the season.

Chris Woakes, making his first appearance of the season for Warwickshire after a knee operation, will resume day three on 12 not out.

"I feel I know my game inside out now and I've improved year on year.

"I've tried to hit the stumps a bit more this season rather than swing the ball away and it helps with the lbws."

"It's been frustrating but the knee feels fine and I was happy with the way I bowled on the first day.

"I scored 90 for the second team last week, so now I need to get some runs here."