It was quite a turnaround.

Regarded as rank outsiders by the bookmakers, written off by many of their own fans and told they would not "come close" to winning the Ashes by Australia batsman Steve Smith, England duly thumped the tourists by 169 runs with a day to spare in the opening Test at Cardiff.

"This is party time," added former England batsman Geoffrey Boycott. "We have out-batted them, out-bowled them and out-captained them in this match. Nobody expected this."

How did England pull off such a remarkable turnaround - and can it continue for the rest of the five-match series?

England, who were whitewashed 5-0 in Australia in the most recent Ashes series 18 months ago, went into this summer with morale low and expectations lower.

Knocked out in the group stages of a miserable World Cup campaign and unable to beat a West Indies side described as "mediocre" by incoming England and Wales Cricket Board chairman Colin Graves in their spring Test series, their performances were poor enough to cost head coach Peter Moores his job in May.

Reinvigorated by stand-in coach Paul Farbrace and playing a self-styled "positive brand of cricket", they matched New Zealand in two thrilling Tests before winning an enthralling one-day international series that saw them post their highest total and pull off their biggest ODI run chase in history.

Former England captain Michael Vaughan told BBC Radio 5 live: "English cricket should thank New Zealand captain Brendon McCullum on many counts because they looked at the New Zealand team and thought 'we want to play like that'." 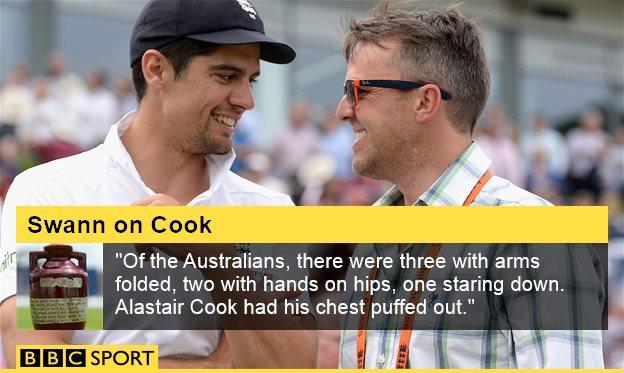 England captain Alastair Cook's conservative leadership has been heavily criticised in recent years, with legendary ex-Australia spinner Shane Warne claiming it is the "worst I have ever seen".

Australia counterpart Michael Clarke, meanwhile, is widely regarded as one of the most attacking and astute skippers in the world.

However, at Cardiff many of Cook's inventive field placings paid off - Cook caught Smith at short mid-on on the opening day, Adam Voges drove to short extra-cover and Brad Haddin was superbly taken by Cook at short mid-wicket on the final afternoon.

He also enjoyed success with his bowling changes, most memorably when spinner Moeen Ali trapped David Warner lbw with his third ball shortly before lunch on Saturday to spark a collapse of six wickets for 25 runs.

"Everything Cook has touched has worked," said Vaughan, who led England to Ashes glory in 2005.

"Michael Clarke is right up there with the best captains but Alastair Cook has just out-captained him this week. He has manoeuvred his field better, and who thought we'd be saying that?"

England pace bowler Stuart Broad, who took 3-39 in the second innings, said: "Cooky had a really good game as captain - he put fielders in places in front of the bat that could apply some pressure." 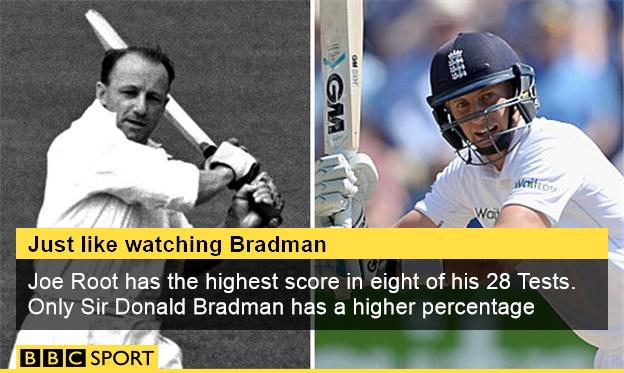 In Joe Root, English cricket has a new hero. Since being dropped for the final Test of the 2013-14 Ashes whitewash in Australia, he has scored 1,512 runs at an average of 84.

The 24-year-old is becoming the fulcrum of the England batting and his first-innings rescue act in Cardiff, where his brilliant counter-attacking 134 helped them recover from 43-3 to post 430, was a familiar tale.

Dropped on nought by Australia wicketkeeper Brad Haddin, Root went on to record his seventh century in 26 Tests, an innings he described as his "most important" for England.

"Root didn't just go on - he went on to make a big hundred and that changes a game," said Boycott. "It's so important that if you get a slice of luck you make it count."

He followed it up with 60 in the second innings, claimed 2-28 with his part-time off-spin and took the catch that sealed victory.

There was little doubt over the destiny of the man-of-the-match award in a game when the crowd's chants of "Roooooot!" were never far apart.

Asked how good Root can become, Cook said "the world is his oyster", while former England spinner Graeme Swann added: "I am so glad he's English."

Bowling and fielding comes together

Much was made of the potency of Australia's pace bowlers in the build-up to the series, while some commentators questioned England's ability to take 20 Australia wickets in a match.

Yet all five members of the home attack - James Anderson, Broad, Mark Wood, Ben Stokes and Moeen - impressed this week.

Moeen went into the game with question marks over his place in the team but took five wickets, including the notable scalps of Smith and Clarke in the first innings.

The "outstanding" Broad was "the pick of the seamers", according to Vaughan, who reserved special praise for Durham seamer Wood after he took four wickets in his first Ashes Test.

"Wood has been a revelation. He has given England something different they have not had for a while," said Vaughan.

"Forget what he does - and he gets them down at 90mph - it's his energy, his love for the game. He's always smiling and you need that in your team."

With the exception of Root dropping a tough chance at third slip early in Australia's second innings, England's catching was faultless - in contrast to their careless displays in the field against New Zealand.

Cook revealed catching practice featured heavily in their pre-Ashes bonding trip to Spain with new coach Trevor Bayliss, saying: "A lot of the boys had sore hands after those few days."

Australia arrived in England as the team ranked second in the world and in possession of the Ashes urn.

In their ranks are Smith, the world's number one-ranked Test batsman; Mitchell Johnson, the 37-wicket destroyer of England in the most recent Ashes; and Mitchell Starc, man of the tournament in Australia's triumphant World Cup campaign.

However, before a ball was bowled, former Australia fast bowler and Yorkshire coach Jason Gillespie highlighted some weaknesses.

"They're Dad's Army," he said. "They've got a 37-year-old keeper in Brad Haddin, a 37-year-old opening batter in Chris Rogers, their captain has got a glass back and they've got a fast bowler - Ryan Harris - who's 35 years of age and who's got a dodgy knee."

Gillespie, who took 259 wickets in 71 Tests, may have been on to something.

Harris retired during Australia's final warm-up game, an unconvincing win over Essex in which Starc was wayward and off-spinner Nathan Lyon returned figures of 1-200.

In Cardiff, Australia's problems mounted as Haddin dropped Root before he had scored - Vaughan said it could be a "key moment in the series" - Starc struggled with an ankle injury and Shane Watson's habit of falling lbw showed itself once more.

"Gillespie has been right - they have looked old this week," said Vaughan. "Australia have been rubbish.

"From nowhere they have put in a performance that would rank as bad as there has been under Darren Lehmann."

Former Australia seamer Glenn McGrath added: "I'm thinking what positives Australia can take and there are not too many. England have basically outplayed Australia in every department."

BBC Test Match Special summariser Simon Hughes said: "There are seagulls out here at Cardiff and they look like vultures about to feed on the carcass of Australian cricket.

"It was a very exciting performance by England. They didn't let the Australians back in it from the moment Brad Haddin dropped the Ashes."