England hammered home their advantage over Australia in the first Test on a fast-moving third day to put themselves in pole position to take the lead in the Ashes.

The hosts claimed Australia's last five wickets for 44 runs on Friday morning to bowl them out for 308 and secure a first-innings lead of 122.

Ian Bell and Joe Root both scored 60 and Ben Stokes 42 as England surged further ahead in the afternoon session to the delight of a buoyant Cardiff crowd.

And although wickets fell regularly in a frenetic finale, Mark Wood's unbeaten 32 helped England reach 289 all out to set Australia an improbable 412 to win.

Only two teams in Test history have successfully chased that many runs, with Australia's best effort the 404-3 by Don Bradman's 'Invincibles' at Headingley in 1948.

England set the tone for a near-perfect day with an electric performance on the third morning, executing their plans to perfection to finish off the Australia innings.

Shane Watson's vulnerability to lbws was brilliantly exploited as Stuart Broad dismissed him for 30 in the second over of the day before Wood pinned Nathan Lyon in front of his stumps.

James Anderson found swing with the new ball to induce edges from Brad Haddin and Mitchell Starc, with Broad removing Mitchell Johnson in between.

In little more than an hour, England had advanced from a position of relative strength to one of total control.

After a nervy start with the bat - failures for Alastair Cook and Gary Ballance left England teetering on 22-2 - their second innings found momentum.

Adam Lyth showed his mettle with a fluent 37, but the main catalyst was Bell, who put a dreadful sequence of 56 runs in nine innings behind him with a fine half-century.

The Warwickshire batsman went on the front foot from the off, lashing two cover drives in one Mitchell Starc over and peppering the third-man boundary with his trademark late cut.

He reached fifty off 75 balls, and underlined his new-found confidence by crashing Johnson over cover for his 11th four.

The next ball brought Bell's undoing however, as, clearly expecting the short ball, he backed away slightly and was clean bowled to give Johnson his first wicket of the match.

Runs for Root, Stokes and Wood

By the time of Bell's dismissal, England were flying and the in-form duo of Root and Stokes kept them airborne, with both finding the boundary nine times.

A mini-collapse from 207-4 to 245-8 in the last session gave Australia a glimmer of hope, only for England to find inspiration from an unlikely source.

Swinging from the hip, Wood took the lead role in a 43-run partnership for the ninth wicket with Moeen Ali and was still at the crease when Anderson became Lyon's fourth victim in the very last action of the day.

Could the Welsh weather save Australia?

England's brilliance has set up the possibility of a four-day finish, and the hosts would be wise to do their utmost to wrap things up on Saturday because of heavy showers forecast for Sunday.

Australia will no doubt still fancy their chances of pulling off a record-breaking victory, but in reality the Welsh weather represents their best chance of avoiding going into next week's second Test at Lord's 1-0 down. 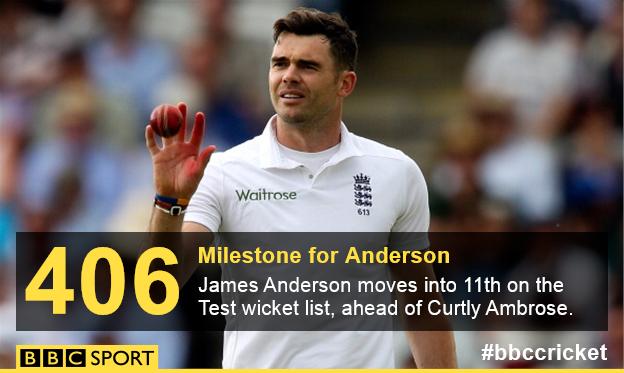 Could Australia pull it off?

Australia spinner Nathan Lyon: "We're definitely still in it. If we bat two days the result will go our way. There's no reason why we can't dig deep.

"We've got to learn from our first innings with the bat - be more patient. There were too many 30s in the first innings, so we need to try and push on a bit more and have a couple of our top five get big hundreds."

England batsman Ian Bell: "There are no gimmes and we expect more tomorrow. We are going to have to work hard to win."