Time to mark the 10-year anniversary of 2005. No, not the glorious Ashes of that year, but another significant moment in the history of English cricket: the last time live Test cricket was shown on terrestrial television in the UK.

What has it done to the game in Britain? Cause and effect can get tangled early in this emotive story, so here's a straightforward one, before we get on to how much money has gone where, and what it might have achieved: how many are still watching?

Channel Four's free-to-air coverage of the 2005 Ashes had a peak audience of 8.2 million people, on the Sunday afternoon of the fourth Test which would put England 2-1 ahead.

And those are peaks, too. A non-Aussie series, for both Channel Four and Sky, is likely to average closer to a fifth of those Ashes numbers.

We also know that playing numbers are falling - a 7% decrease at the amateur level from 2013 to 2014, according to figures from the England and Wales Cricket Board. A total of 844,000 players might still sound healthy, but only 247,000 of those play 12 or more matches a year.

Quite how those two sets of figures interact is less certain. 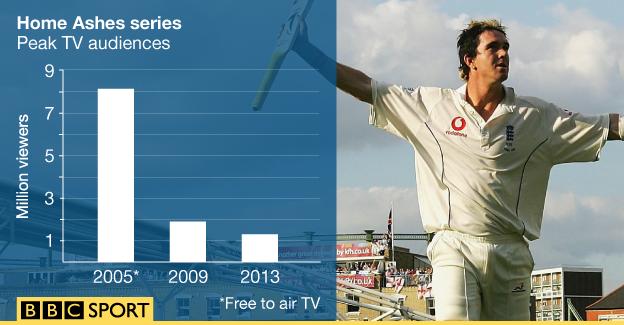 Cricket is not alone in shedding players. Grassroots football continues to do the same, from more than two million regular players in 2006 to closer to 1.8 million today. There were 245,000 fewer people swimming at least once a week for 30 minutes by the end of 2014 than there were a year before.

For all the success of sports like cycling (according to British Cycling, there are 1.7 million more people cycling regularly now than in 2008), there is another like golf, which saw club membership in England drop 20% between 2004 and 2013 despite its biggest event, the Open, being on terrestrial TV.

Do we need to be watching our heroes in action to develop and nurture a love for the game?

Ed Hinchliff was born in March 2005. His parents don't subscribe to Sky Sports, so he has grown up in an era when the only international cricket he can watch is the highlights of home Tests on Channel Five. He is sport-obsessed, and lives in a county, Surrey, with both a historically successful first-class side and a strong network of local clubs.

He can name the entire Arsenal squad. Off the top of his head, in the week before Wimbledon starts, he could name eight men's tennis players.

Cricket? There is a pause. "Alastair Cook. Joe Root." And that's it.

Ed has never seen live cricket. Neither does he know the rules. He knows the sport exists, because two boys and a girl in his class at school play it. But Ben Stokes? Jos Buttler? England's leading wicket-taker of all time, James Anderson? They are yet to enter his world.

Ed's example is a case study rather than a survey. But it underlines the biggest fear of those opposed to the ECB's decision to sign with Sky: that the sport, for kids without satellite television, has become an invisible irrelevance.

"Ben's success has really helped," he says. "We have his shirts up in the clubhouse, and it reminds the kids that they could make it too.

"But there has been a decline in numbers in our area for a few years now. We used to have two under-15 teams, and now we just have one covering both under-14s and 15s."

How much of a role does television have in igniting his young charges' interests?

"Some have IPL shirts. Some try to bat like Chris Gayle and Brendon McCullum, or try to bowl slower balls like they've seen in T20. But Sky has limited the chance for some, because less privileged kids don't have satellite TV.

"We saw a massive increase in kids coming down after 2005. That's when a lot got engaged. There was another kick on in 2009, but it wasn't as big.

"Role models help. So does an exciting brand of cricket, like England played against New Zealand. I like to think positive as much as I can, but the numbers are a worry."

Where the cash goes

The Sky broadcasting deal is worth around £65m a year to the ECB. That is set against a turnover in the last financial year of £175m.

That is a lot of money to a governing body with myriad pressing responsibilities - developing and supporting the game at grassroots, running successful international teams, keeping afloat the first-class county game.

The ECB spent £24.2m on "enthusing participation" last year, up from £20.5m in 2010. That rather vague phrase covers all aspects of the non-professional game - funding the 39 county boards, capital projects, coach education, minor countries cricket, umpires and scorers and junior competitions.

It seems like a great deal. It is five times as much as was spent in 2005, the last year of the pre-Sky deal. As the ECB point out, they have consistently met the government's voluntary target for investing 30% of broadcasting revenue into the grassroots game, something that puts the football Premier League in comparatively unflattering light.

And yet. In the same year that £24m went to participation, £54.2m went to the first-class counties. While the money spent on participation has grown by 18% over the past five years, the chunk the counties receive has increased by 58%.

Counties are the bedrock of the English professional game. They now run academies which could help develop the next generation of England internationals. They are also financially unsustainable under any ordinary economic model.

Chance to Shine is the national charity that was set up in 2005 as part of attempts to reverse the decline of cricket in state schools. In 2013 they worked with 4,278 primary and 911 secondary schools, and in the last decade have introduced more than two million kids to the sport.

Except it is again a little more complicated than that. The majority of Chance to Shine's funding - 57% in 2013-14 - comes from central government, via Sport England. A further 12% comes from public fundraising. Only 24% comes from the ECB.

And the charity needs funds. It has not yet been able to reach two-thirds of state secondary schools, at a time when the England Test side is ever less typical of the nation it represents.

"In our experience, the best way to inspire young people about cricket is to give them the chance to play the game," says Luke Swanson, Chance to Shine's chief executive.

"Ultimately we would like all young people to have the opportunity to play and watch cricket, and in an ideal world there would be some cricket available to them on free-to-air TV.

"At the same time we understand the commercial realities and are acutely aware that many parts of the sport have benefited hugely from the partnership between the ECB and Sky, ourselves included."

To the top of the pyramid. Last year, the ECB spent £28m on its international set-up - men's and women's England teams across all three forms of the game, the national academy at Loughborough, its age-group teams.

That funds not only players' central contracts, keeping the cream of the talent for the national side rather than losing them to overseas T20 leagues, but the coaches and support staff that helped take England to number one in the Test rankings.

And this is the killer argument for many of those in the game: that extra investment has created unprecedented success, not only on the men's side but in the women's game. From international success come new heroes. From heroes come a new generation of cricket acolytes.

As Bryan Henderson, Sky Sports' executive cricket producer says: "We're proud of our partnership with the ECB. It has resulted in record investment and more coverage across all levels of the game, with major benefits on and off the pitch."

Sky's coverage is also both comprehensive and innovative. In 2014 they showed 4,607 hours of live cricket, and won a Bafta (Sport and Live Event) for their work on that final day of the first Test in 2013. This year, for the first time, they are broadcasting every ball of the women's Ashes.

Neither do you necessarily need a monthly contract to watch it. Through the online streaming service NOW TV you can buy day or week passes to access all Sky Sports channels.

At the same time, for all England's successes, this has also been a decade in which the Test side has twice been thrashed 5-0 in Ashes series down under. Even in the dark days of the 1980s and 1990s, the days of getting by on terrestrial deals, England never stooped so low.

There are also alternative models. In Australia, all their home Ashes series are free to air on Channel Nine. The Big Bash T20 competition is similarly free on Channel Ten.

The grassroots over there? Participation numbers climbed by 16% in 2013-14. Over the last four years numbers have risen by 30%. Cricket remains the country's number one sport.

Since Andrew Flintoff won BBC Sports Personality of the Year in 2005, no cricketer has finished in the top three in the public vote. In a decade where three cyclists won it in five years, the best any cricketer has done is Andrew Strauss's sixth after the Ashes win of 2009.

None made the 10-strong shortlist in four of those years. After the last home Ashes in 2013, England's player of the series, Ian Bell, finished 10th and last.

That can easily be read as a potent symbol of cricket's popular decline. There are fewer popular heroes. Those that there are seem to be loved a little less.

To which we should also remember that 2005 was like nothing else, arguably less a benchmark than a one-off peak.

In the decade before Flintoff's win, there had been no cricketer in the top three of Sports Personality either. You have to go back to Graham Gooch's third place in 1990 to find the next, and then to Ian Botham's second in 1985.

The reason 2005 resonated was because it had been 18 years since England last won the Ashes, 20 since they had won them at home. It also reached the parts it did because everyone could watch it.

"Building up that 2005 series, I think the profiles of the players had got bigger and bigger," Flintoff told BBC Sport.

"But that series, being on terrestrial TV, with millions watching as opposed to thousands, and the media coverage - there were people outside my house, paparazzi, they were following me to Asda.

"It was really bizarre and I didn't like it to begin with, but it did change our lives. Without that series, I wouldn't be doing half the things I'm doing now."

Could the same ever happen again, when so many cannot see the drama unfold?

"I did feel in that Test match against New Zealand at Lord's there was just that sense that something was starting to happen," says Michael Vaughan, captain in that epic series. "I crossed my fingers that it does happen for five Test matches against Australia.

"Hopefully we'll get that buzz around the game. You'll have superstar players producing the goods. Who knows - we might be talking about Ben Stokes in a few months' time."

English cricket must hope so. It is a sport under both financial and cultural pressure. The Ashes provide a stimulus like nothing else. This is a summer to capitalise.