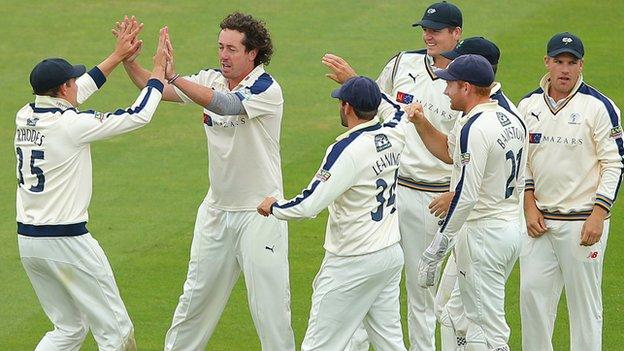 Ryan Sidebottom rolled back the years to claim a season's best 6-34 as champions Yorkshire seized control against Warwickshire at Edgbaston.

The home side were already in trouble whens they resumed on 11-2.

After a brief rain break, Yorkshire reached 125-1 by the close of play with opener Will Rhodes 53 not out.

Just nine balls were possible in the morning session before Warwickshire - batting record breakers last week - were shattered by losing five wickets in 29 balls as they slid from 29-2 to 35-8.

It was high-class fast bowling from the Yorkshire pair, although they did get some help, with Ian Westwood offering no shot to a Sidebottom delivery which hit off-stump, just as Chopra had done the previous evening.

When Sidebottom bowled Laurie Evans then removed youngsters Peter McKay and Sam Hain, he had the first six wickets but his aspirations to an 'all-10' ended when Brooks forced Jonathan Trott to edge into the slips.

Brooks added the scalps of Jeetan Patel and Boyd Rankin to bring last pair Rikki Clarke and Oliver Hannon-Dalby together at 37-9, with 27 needed to reach the follow on figure.

The last pair then added 32, Clarke hoisting Brooks for six before cutting Tim Bresnan for four to take the score past the follow-on point before being bowled by Steve Patterson for 28 from 42 balls.

Yorkshire then made batting look a little more comfortable proposition again as they reached the close with a 269-run lead, thanks to Rhodes, well supported by Alex Lees (28) and Jack Leaning (28 not out).

"Credit to Yorkshire. Ryan Sidebottom was outstanding and they bowled exceptionally well, albeit in very helpful conditions, and caught very well.

"We were undone by good bowling but our batting was weak. Too many of the guys were trapped in the crease and it was only our last pair that really started getting properly forward or back.

"The game's not dead yet but to save it we will have to fight like we have never done before and play a lot better than we have done in the last two days."

"Before play Dizzy (coach Jason Gillespie) asked me to say a few words to the lads and I said we had to bowl full and straight so I had to go out and do what I had told them to do.

"Jack Brooks bowled really well and we complement each other well. Sometimes one guy bowls at two an over and the other guy gets the wicket,s but it doesn't matter which way round it happens, it's all about being effective as a unit.

"We didn't bat very well so to come out and bowl them out for 69 was very pleasing."