Worcestershire suffered a dramatic batting collapse after tea as Nottinghamshire beat them by 113 runs.

However, once captain Daryl Mitchell skied Samit Patel to Andy Carter for 76, the lower order folded as they were dismissed for 210, the concussed Alex Gidman having been unable to bat.

Carter, despite having a side injury, starred with the ball with 4-46.

With Mitchell looking well set, there was little sign of the problems to come in the evening session, which saw Worcestershire lose their final six wickets for just 17 runs, Carter picking up three of the final four.

Earlier Notts, who were also missing injured paceman Luke Fletcher, were reliant on Australian Ben Hilfenhaus to take on the majority of the morning session's workload.

And it was the right-arm seamer who made the early breakthrough when he trapped Richard Oliver lbw to leave the visitors 17-1. 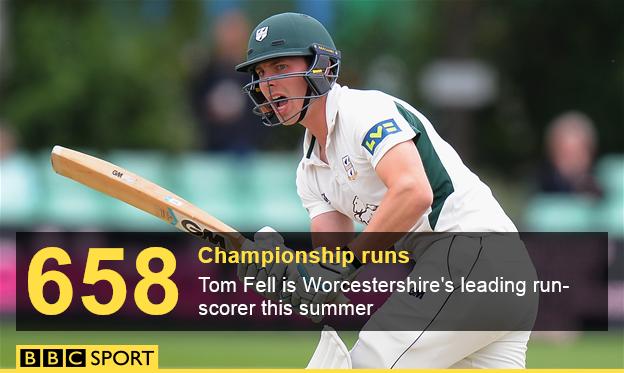 Tom Fell and Mitchell took advantage of the hosts' lack of pace options, as they both brought up their half-centuries before lunch.

Once Brett Hutton removed Fell after the interval for 58, teenager Joe Clarke made a gritty 29 before Carter sent his off stump flying.

Patel, who bowled unchanged in the afternoon session, then turned the match after tea with the crucial wicket of Mitchell.

The skipper miscued a sweep shot which came off a top edge and looped to Carter at fine leg.

Worcestershire were still well placed at 193-4, but the final five batsmen were all dismissed for single figure scores to leave the visitors with just one win from nine in Division One.

Notts picked up 19 points from the match to move off the bottom of the table, above eighth-placed Worcestershire.

"From a bowling and fielding perspective, we were outstanding.

"I genuinely didn't think Carter was going to bowl again in the match after he injured himself on the first day - and I don't think he will play now for about a month, so his contribution was fantastic and much appreciated."

"In this division you are playing against top sides and they had six international cricketers out there.

"They showed that, although they have not had the greatest of seasons, when they all come together they are quite formidable.

"Our young lads have to learn to stand up to these bigger, stronger teams."