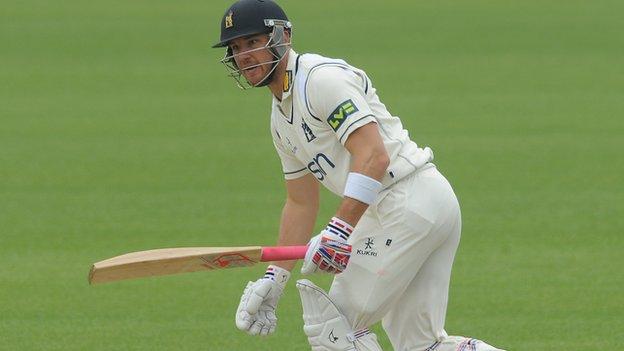 Warwickshire batsman Laurie Evans made his first Championship century in two years to help the Bears ease towards safety against Sussex at Edgbaston.

Just two wickets fell in the day, both in the afternoon session, to leave the home side needing a further 85 runs to avoid the follow-on the final day - and condemn the game to a certain draw.

Jonathan Trott (68) and Chris Wright (65) batted for the entire morning.

Responding to Sussex's first-innings total of 601-6, the Bears resumed in a state of some concern on 62-3, but all six Sussex bowlers went empty-handed in the morning session as their victory bid jarred to a halt.

After reaching 68 at lunch, his 11th time past fifty or more in 30 Championship innings against Sussex, Trott went almost straight after the resumption when a good delivery from Matt Hobden beat his defensive stroke to clip the top of off stump.

Having shared a stand of 114 with Trott, nightwatchman Wright stayed for a further 16 overs, reaching 65 in nearly three-and-half hours, before driving a catch back to the left-arm spinner, Ashar Zaidi.

But the stand of 160 between Ambrose and Evans, who reached his ton with a straight drive off Peter Burgoyne for his 15th boundary from 197 balls, eased their side a lot nearer the follow-on avoidance target.

Admittedly, four key fast bowlers - Warwickshire's Chris Woakes and Keith Barker, as well as Sussex pair Ajmal Shahzad and Chris Jordan - are all missing this match through injury. But, on this featherbed surface, it may not have made a great deal of difference.

"I guess it's been a long time coming. I got close at Lord's (98 against Middlesex earlier in the month. But I suppose to put the last 18 months behind me and get a score was good, albeit on a flat and pretty friendly wicket.

"Chris Wright batted exceptionally well. He said to me a couple of days ago that he wanted to get in as a nightwatchman and make a hundred and he batted brilliantly. That just makes my job, coming in when the bowlers have been bowling for two hours, that much easier.

"Jonathan Trott played brilliantly as well. It did take some steady concentration out there but you'd be disappointed to get out. You have to put a high price on your wicket and everyone has done that."