Separated by the Tamar and conflicting views about whether clotted cream or jam goes first on a scone, Devon and Cornwall have always had a keen rivalry.

But in the world of cricket the two proud counties could be willing to put differences aside and come together, if it offers them a chance to play at the highest level.

The England and Wales Cricket Board (ECB) is currently reviewing the structure of the domestic game and one possibility could be to increase the County Championship from 18 to 21 clubs, split into three divisions, instead of the current two.

It has been suggested that Ireland and Scotland could take two of the extra places, and Devon and Cornwall are willing to unite to fill the third.

Devon has provided a number of well-known cricketers, including former England wicketkeeper Chris Read and brothers Craig and Jamie Overton, who play for Somerset and were recently called into the national one-day squad.

Cornwall, meanwhile, had a local boy in England's 1986-87 Ashes-winning team with Surrey wicketkeeper Jack Richards, who was born in Penzance, playing in all five Tests.

"I heard rumours over the winter that the ECB were looking to expand the County Championship and that they might be looking at Scotland, Ireland and one more team to join the championship," Sean Hooper, the chief executive of Cornwall Cricket Board told BBC South West.

"Someone suggested it might be a combined Devon and Cornwall team and I thought 'What a great idea that is'.

"In rugby, we have a lot of success with Cornish Pirates and Exeter Chiefs, so young kids have a way where they can play professional sport through rugby, but we don't have that in cricket, the nearest is Somerset which is two-and-a half-hours away, so they don't see any first class-cricketers."

His Devon counterpart, Neil Gamble, is also keen on the idea, if a little more sceptical.

"It's a very attractive idea, but I think there are a number of difficulties that would arise pretty fast that would make it somewhat impractical.

"In the first place, there are 18 first-class counties at the moment, of whom five or six find it very difficult to survive, and only survive because of help from the ECB.

"Probably, that's as many clubs as should exist, and if we try to expand the base even more, we may well have additional financial pressures on individual teams."

But he added: "I think if it was a real practical possibility, I think we would subsume any rivalries and hostilities and work very hard together to make sure it was a success." 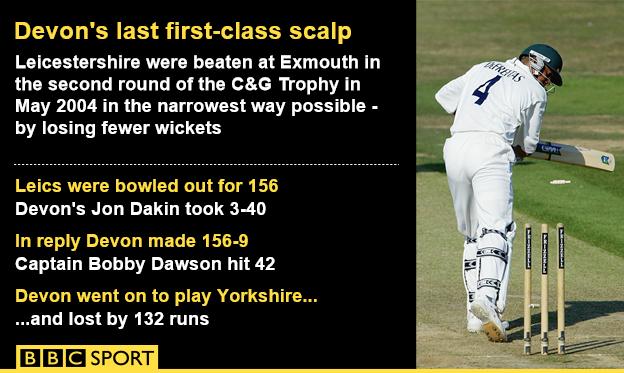 The ECB is saying very little on the subject at present, apart from a statement saying that it is "at an early stage of the review process".

No decision on changes to the domestic programme are expected until late November, but there is no doubt that there is an appetite for first-class cricket in the south-west area.

Devon took the scalp of Leicestershire in the 2004 C&G Trophy and their one-day matches against first-class counties were always popular, with crowds of 5,000 regularly turning out at Exmouth.

Gamble said: "Devon has always been quite a strong minor county.

"In 1948, they applied to be first-class county to the MCC, who controlled things in those days, and they never received a reply, so it was obvious that the MCC didn't think it was a viable option."

Whether or not it is viable in 2015 remains to be seen, but the will is certainly there.

"I've always been a bit of an optimist and a dreamer," said Hooper.

"Is it realistic? I don't know. Could it happen? Yes it could. If the ECB want to talk to Devon and myself any further we'd be really keen to pursue that conversation."