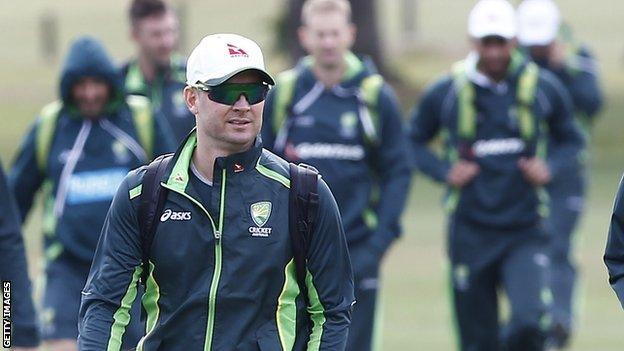 Australia captain Michael Clarke says his side are aiming to prove wrong former team-mate Jason Gillespie's claim that they are a 'Dad's Army'.

Gillespie, who took 259 Test wickets for Australia, is Yorkshire coach and has tipped a young England side for success in this summer's Ashes series.

As many as six Yorkshire players could feature in the Tests, with pace bowler Liam Plunkett the oldest, aged 30.

Gillespie held talks to take over the England side before new coach Trevor Bayliss's appointment. Since joining Yorkshire in 2011, he has led the county to promotion and the County Championship in 2014.

Who are the Aussie oldies?

Australia's squad includes opener Chris Rogers and wicketkeeper Brad Haddin, who are both 37, as well as 35-year-olds Ryan Harris and Adam Voges.

Clarke himself is 34 and has consistently been troubled by injuries to the point that he feared his career might be over because of a hamstring injury last December.

However, he has since led his side to World Cup success on home soil and a series win over West Indies.

"A lot of our young players have come a long way over the last few years," added Clarke.

"The senior players deserve a lot of credit for mentoring them and helping them through the tough times and we're seeing a lot of benefit from that.

"They will play a big role in this series - their youth and enthusiasm is vital to our squad.

"The experience of the senior players is crucial too and, hopefully, we can find that perfect mix and we're able to have success."

What about sledging in the Ashes?

Clarke also insisted the Ashes series will be played in the "right spirit".

Australia were involved in a number of confrontations against India at the turn of the year.

Pace bowler Mitchell Johnson had an angry exchange of words with India batsman Virat Kohli during the third Test between the two sides in Melbourne.

Opener David Warner was then fined 50% of his match fee after he told Rohit Sharma to "speak English" when the two clashed in the one day series.

Clarke was also fined 20% of his match fee in November 2013 for using an obscenity while warning England bowler James Anderson to expect a broken arm as Australia won the first Test down under on the way to a 5-0 series victory.

"I'm confident the Ashes will be played in the right spirit. Both teams will play hard," said Clarke.

"We respect that there's a line you can't cross. Both teams might head-butt that line but I'm confident we won't overstep the mark.

"As captain, I'll make sure I'm leading the way on that front and I'm confident the boys will follow."

There will be live coverage of the Ashes on Test Match Special, and comprehensive coverage on the BBC Sport website which will include live text commentary on each day of the Test series.