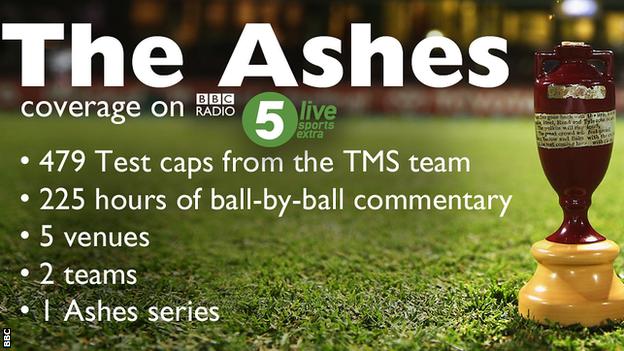 England must not be afraid of losing if they are to beat Australia and regain the Ashes, according to former captain Michael Vaughan.

England's bid to avenge a 5-0 defeat in 2013-14 begins on 8 July, with every ball covered live by Test Match Special on BBC Radio 5 live sports extra and online.

"They have to take Australia on with the mentality of 'we don't care about losing' because that will make the Aussies fear them more," said TMS pundit Vaughan.

"If they have any kind of worries or concerns, then they will get walloped."

Alastair Cook's side will take on Australia with new coach Trevor Bayliss in place after displaying a revamped positive approach in the Test and limited-overs series against New Zealand.

And Vaughan, who led England to Ashes success in 2005, says he can see parallels between this summer and that successful campaign of 10 years ago.

"I can sense the country is really enjoying cricket and the way England are playing," said Vaughan.

"If England can play in the same spirit as we've seen in the ODI series, even though the Ashes are a different format, they have a chance of causing a shock.

Test Match Special will have live coverage of every ball of the five-match Ashes series on BBC Radio 5 live sports extra and at bbc.co.uk/cricket.

You can follow it wherever you are, with commentary on your mobile or tablet via the BBC Sport App.

The BBC Sport website will bring you live text commentary every day from 09:00 BST, as well as all the latest news, features, votes and the best of social media.

Fans can also get push alerts via the BBC Sport app to know when a wicket has fallen.

If you are outside the UK you can listen to TMS' Ashes coverage via the England and Wales Cricket Board's YouTube channel (although some territories will be subject to ECB rights agreements).

Former England stars Michael Vaughan, Geoffrey Boycott, Graeme Swann, Vic Marks, Phil Tufnell and Alec Stewart will be providing their analysis and insight into the key moments throughout the series.

And they will be joined in the commentary box by former Australia fast bowler Glenn McGrath, who has already predicted a 5-0 whitewash for the tourists.