Durham fought back from a perilous second-innings position to regain control against Sussex at Arundel.

Steve Magoffin had reduced them to 13-4, boasting figures of 4-2 from 2.4 overs at one stage, before Scott Borthwick (74) and Gordon Muchall (66 not out) led the visitors' recovery.

Earlier, Durham's Chris Rushworth took 6-49 as Sussex slumped from their overnight score of 44-2 to 201 all out.

Keaton Jennings began their collapse, taking a superb one-handed catch off the bowling of Graham Onions to remove Matt Machan.

Luke Wright was the only Sussex batsman who did not make it into double figures, but no player passed 40 as pace bowler Rushworth claimed his fourth Championship five-wicket haul of the season. 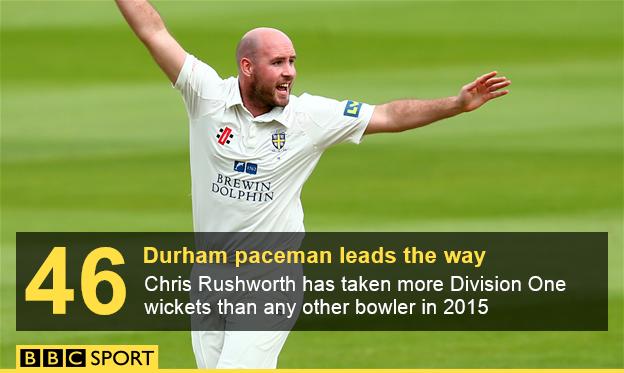 Rushworth bowled Ajmal Shahzad in the last over before lunch to leave Sussex 135-8 and in danger of being asked to follow-on.

But some useful lower-order runs from Magoffin, as well as debutants Tim Linley and George Dockrell - who top-scored with 37 not out from 43 balls - meant the hosts conceded a first-innings deficit of just 100.

Durham made an awful start to their second innings, with experienced Australian seamer Magoffin removing openers Mark Stoneman and Jennings in the first five balls and then bowling Paul Collingwood and Michael Richardson in successive overs.

Borthwick and Muchall, who hit 81 not out in the first innings, rebuilt with a fifth-wicket stand of 118 before Borthwick was bowled by spinner Luke Wells to fall short of his second Championship century of 2015.

"We expected the wicket to turn, which it has done a bit, but it's also done a lot for the seamers.

"We've effectively got two fit seamers out there in Steve Magoffin and Tim Linley with Ajmal Shahzad unable to bowl, which makes it seven bowlers injured at the club at the moment.

"Magoffin has given us a chance with that magnificent spell and we just need to try and finish them off quickly tomorrow and then bat well."

"There is a spot on the wicket at one end where there is variable bounce and when you have got quality bowlers like Steve Magoffin, Graham Onions and Tim Linley to exploit conditions it's going to be hard for batsmen at times.

"They were my best figures of the season which I was pleased with and it's good to have put us in a decent position.

"I'm in good form at the moment and if that helps Durham to win games then I will be happy."