Durham earned their first bonus batting point for five matches as they edged the first day against Sussex, despite five wickets for Tim Linley (5-63).

The 33-year-old, who signed on loan from Surrey on Sunday, took three wickets in the morning, before Gordon Muchall (81 not out) led the fightback.

The visitors were eventually bowled out for 301, as Luke Wells (3-35) took the final wicket of the innings.

Having lost Keaton Jennings for five in the fifth over of the day, Durham's Mark Stoneman hit back with a quickfire 51 from 44 deliveries. 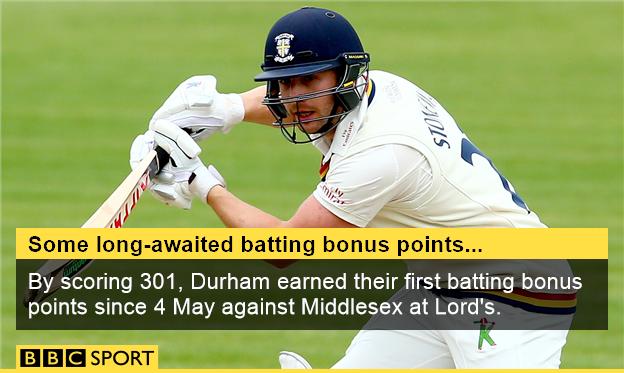 At 80-1, the Championship leaders looked on course for a big score, but Linley struck twice to dismiss Stoneman and Scott Borthwick.

The 33-year-old then had former England all-rounder Paul Collingwood trapped lbw for nine as Durham ended the first session on 147-4.

Linley bowled Ryan Pringle and had Paul Coughlin caught at slip, but Muchall and Rushworth put on 63 for the ninth wicket as the Championship leaders earned a third batting bonus point.

Pace bowler Rushworth then bowled both of Sussex's opening batsman to give his side an encouraging start in their bid for a sixth victory in eight County Championship games.

"I had a knee operation in October so I'm feeling my way back a bit and the chance to come to a club I know was one I couldn't turn down and it's turned out to be a great day for me.

"There was a little bit of seam movement early on and it's really handy when you get an early wicket to settle you down.

"Thankfully for me I grouped enough balls in the right areas and finished with five wickets which was fantastic.

"To get my first five-for since 2012 was also a relief and I'm very proud of how I've performed."

"At the start of the day it looked a pretty good wicket to bat on but there was always a ball with your name on it so you had to try and be positive when you could.

"Once I got in I didn't feel in too much trouble and it was nice to get a few runs.

"I thought Sussex set pretty good fields so we couldn't keep powering along but 301 and three batting points is a decent performance.

"I think we would have been happy with that at the start of the day."