Durham moved back to the top of the County Championship with a fine 120-run victory over Somerset.

The visitors, set a target of 279 heading into the third day at Chester-le-Street, were dismissed for 158, with Peter Trego's 35 the top score.

Somerset had looked favourites on the second afternoon with the hosts 101-6, just 65 ahead, before John Hastings' 79 sparked a lower-order fightback. 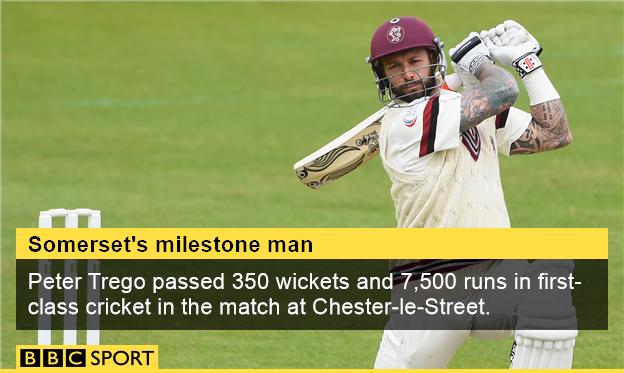 But just as they had done with the bat, Durham's bowlers impressed with the ball to condemn Somerset to a fourth defeat from their opening six County Championship matches.

Rushworth, Division One's leading wicket-taker with 40, also chipped in with 2-46 as Durham completed their fifth win in seven games to leapfrog Middlesex at the top of the table.

"I would like us to start games a lot better than we are but you can't take it away from the boys, the fight and the spirit that's in the camp - they just keep proving the character they've got in the side.

"It was a fantastic comeback after day one - we really did look as though we were in a lot of trouble but the way that we came back into the game and the belief was incredible.

"I thought we showed a lot of pride about playing for Durham and to get another win is another incredible achievement.

"You want to try to win a game by playing well from ball one, we are not doing that at the moment but we're winning games and as long as we continue to do that and get ourselves into positions to win games then I'm obviously going to be happy."

"It slipped away from us in that session. We have done well in the last two weeks and we were ahead of the game here.

"The potential is there but we have to sustain it. You know it's always going to be tricky here and to score 279 to win was a tough ask.

"We showed some good resolve and stuck in, but the damage was done yesterday."