Durham were skittled for just 189 as Somerset enjoyed the better of the opening day of the County Championship game at Chester-le-Street.

The hosts looked well placed at 117-3, but once Keaton Jennings was out for 49, the last seven wickets fell for 72.

Craig Overton claimed 4-40, his best bowling figures of the season, and Tim Groenewald picked up three scalps as Durham were all out in the 50th over.

Despite sitting second in the Division One table, Durham have now failed to pass 200 in the first-innings and earn any batting bonus points in four successive County Championship matches.

The 2013 county champions have still won four out of six games, but their six-wicket victory in the last match against Worcestershire came after they chased down 318 having been bowled out for 198 first time around. 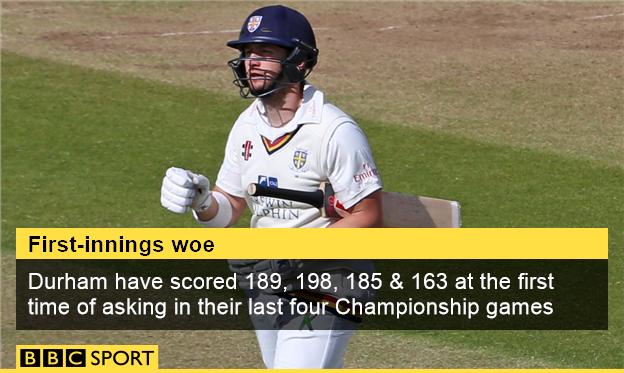 After an even morning session, which saw Durham lose skipper Paul Collingwood for nought but reach 107-3 at lunch, wickets tumbled in the afternoon.

Jennings' dismissal lbw by Groenewald one short of his half-century triggered a collapse which saw the hosts lose four wickets for just three runs and slump to 120-7.

John Hastings launched a late counter-attack with six boundaries in his 28, but once he was bowled by Overton the innings folded and Durham were all out before tea.

In the Somerset reply pace bowler Rushworth removed Tom Abell and captain Marcus Trescothick for 26 early on, before Johann Myburgh and James Hildreth steadied things with a third-wicket stand of 73.

However, Hildreth (35) pulled Scott Borthwick straight into the hands of Hastings and Rushworth returned to dismiss Tom Cooper to give Durham a boost before the close, but Myburgh remained unbeaten on 57.

"It's a fairly slow pitch so we had a plan to bowl as straight as possible and make them play. We pretty much did that and the ball swung a bit which helped.