Somerset and England wicketkeeper-batsman Craig Kieswetter has announced his immediate retirement from cricket because of an eye injury.

Kieswetter broke his nose and damaged his eye socket and cheekbone while batting against Northants last July.

The 27-year-old played 46 one-day internationals and 25 Twenty20 matches for England, but has not featured for his country since January 2013.

"I feel mentally I will never again be the player that I was," he said.

"I have had a terrific career, with plenty of ups and occasional downs, and I am calling time on my career and walking away with no regrets."

Kieswetter, who sustained his injuries when a delivery from Northants' David Willey went through his helmet grille, has struggled to regain perfect vision.

Having undergone surgery, he did briefly return to action for Somerset in September, before heading out to South Africa to play for Warriors in their domestic T20 competition, scoring 199 runs in 10 outings.

But during that period he realised his vision was still impaired and, after confirming in January that he would miss the 2015 season, he has now opted to retire from the sport.

He made his England ODI debut against Bangladesh in 2010, and opened the batting as they won the World Twenty20 later that year - the first time England had won a World Cup in any form of cricket.

Kieswetter was man of the match as England thrashed Australia in the final.

"This is sad news for all concerned," said Somerset director of cricket Matt Maynard.

"Craig is a very popular member of the squad and has made a real impression on the club during his years here. He has been a major influence both on and off the field and will be missed by players, coaches, staff and fans alike.

"At his best Craig was one of, if not the most, explosive keeper-batsmen in the game. He is an extremely gifted cricketer who could win a game on his own. 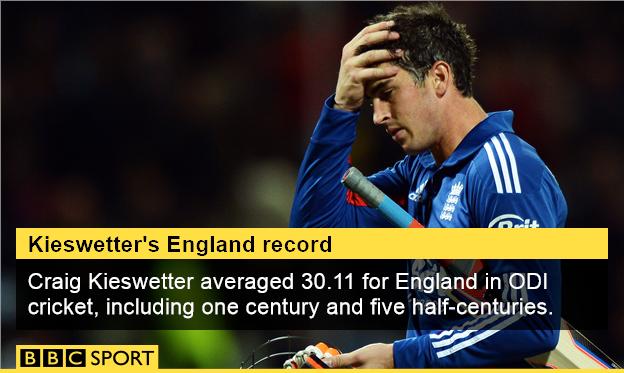 "His record speaks for itself and the game will miss him. I would have loved to have worked with him this year but it just wasn't to be."

In both first-class and one-day cricket Kieswetter averages just under 40, while in T20s his average stands at 31.76. Domestically, he took over 500 catches throughout his career.

The wicketkeeper-batsman, who will lead the Somerset team out against Taunton in the T20 Blast on Friday, first came to prominence with the county when he took over the gloves during the course of a Second XI Championship match against Glamorgan in May 2006.

"I'll have so many memories of a career that spanned nine years of my life during which I have made so many friends. See you all on the sidelines," he added.