James Anderson became the first England bowler to reach 400 Test wickets with two dismissals on day one of the second Test against New Zealand at Headingley.

"It's a nice feeling and a proud moment for me," said Anderson, 32.

"You see the guys that have got 400 in the past, bowlers I've admired over the years. It's surreal to be with them."

He is the 12th player in history to reach 400 Test wickets.

Anderson is playing his 104th Test, 12 years after he made his debut against Zimbabwe at Lord's.

The Lancashire bowler, who started the match on 399 wickets, took the edge of Guptill in the third over of a day that was delayed by rain until 13:30 BST.

That wicket was immediately followed by a short stoppage for rain, but Anderson returned to take his 401st two balls after the break by having Kane Williamson caught behind.

India off-spinner Harbhajan Singh, with 413, is the only current player with more Test wickets than Anderson.

Anderson has also taken 269 wickets for England in one-day internationals and 18 in Twenty20s. 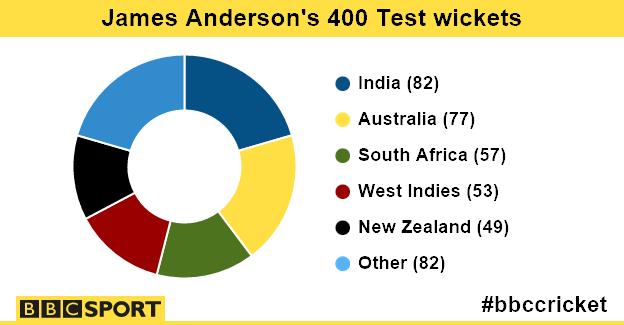