In reaching 32 on the second day of the second Test against New Zealand at Headingley, he overtook Gooch's mark of 8,900, which has stood since 1995.

"It was an amazing moment, a personal one," the left-hander told BBC's Test Match Special.

Cook stands 13th on the all-time list of Test run scorers, and only one current Test player - Sri Lanka's Kumar Sangakkara - is ahead of him on a chart led by India great Sachin Tendulkar with 15,921 runs.

How Cook made history

Although Cook took lunch on 27, he scored only two runs in the first seven overs after the interval.

A half-volley from Tim Southee gave him the chance to drive through point for four as he claimed the record held by batting coach and long-time mentor Gooch.

Cook celebrated with a smile, a modest raise of the bat and a hug with opening partner Adam Lyth as the crowd gave him a lengthy standing ovation.

He eventually fell for 75 midway through the evening session, lbw sweeping off-spinner Mark Craig, having added 177 with Lyth. 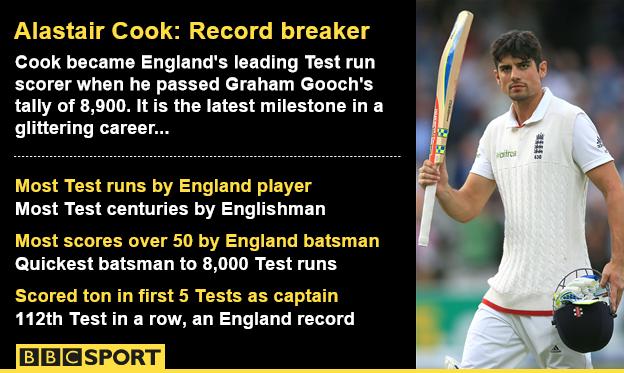 'I probably don't deserve to be there'

"I haven't been nervous in the 20s before - I didn't want to fall four short," Cook told Test Match Special.

"I've not heard from Goochie yet. I'm sure he's somewhere in Essex enjoying a glass of red wine but I wouldn't be here if it wasn't for him."

Cook told Sky Sports: "I probably don't deserve to be there.

"It is a huge battle to have longevity as a Test cricketer; it is an amazing journey. I'm delighted that today was a special day.

"The last 18 months has been tough for me personally - that's part and parcel of being a batter. When you are in a bit of form, you have to make it count."

'Compliments to the chef!'

BBC cricket correspondent Jonathan Agnew said: "It is a massive achievement for Alastair Cook to become England's all-time leading Test run scorer. He is only 30 and could play for four or five more years, notching another 40 or 50 Test matches and probably passing 11,000 runs."

Former England batsman Geoffrey Boycott said: "I've always had admiration for Alastair Cook's batting. If you asked me who is the best opening batsman in the world today, no contest: Alastair Cook."

"I don't think it's a big milestone in his life. What's more important to him is the hundreds he's got, the matches he's won, and the fact that he's now back in his best form."

Ex-England captain Michael Vaughan said: "The most amazing thing about Alastair Cook's record is that he's only 30 years of age.

"I don't think we talk enough in English sport about what Cook's talent really is: stubbornness, concentration, the ability to have a real strong game plan. What's he got in abundance is that inward talent - strength, character - more so than anyone else I played with."

Former England batsman and team-mate Kevin Pietersen tweeted: "I was quoted a few years back saying he could break Sachin's record. At the age of 30, he still has a chance! Quite brilliant batsman! Well done, AC!"

England bowler Steven Finn tweeted: "Exceptional effort from Cookie to break that record. Many many more to come too. Compliments to the chef!"

The International Cricket Council also paid tribute to Cook, although it managed to spell his name wrong...

2006, Nagpur: Flown out to India from the West Indies as a late addition to the England Test squad, Cook scored 60 and 104 not out on his debut.

2010, The Oval: Facing calls to be dropped after scoring only 106 runs in eight innings, he hit 110 against Pakistan to book his place on the flight to Australia for the winter Ashes.

2011, Edgbaston: Amassed 294, his highest first-class score as England beat India by an innings and 242 runs.

2012, Kolkata: Hit 190, his third century in successive Tests after taking over as permanent captain, to set England on their way to a historic 2-1 series win in India. 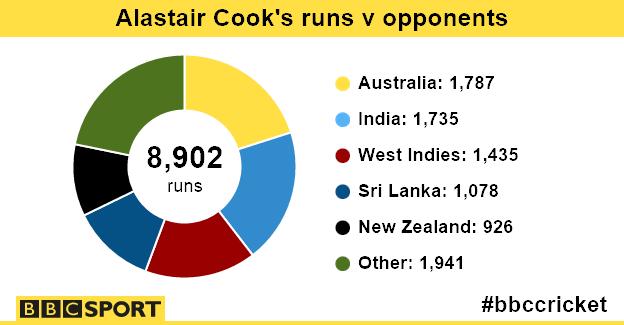