New Zealand dominated day two of the first Test against England to move into a strong position at Lord's.

Kane Williamson made an unbeaten 92 and Martin Guptill and Tom Latham passed 50 to take the Black Caps to 303-2, only 86 behind.

England will look to missed opportunities, with debutant Mark Wood having Guptill caught off a no-ball on 24 and Ian Bell dropping Latham on 21.

The hosts earlier added 35 runs for the loss of three wickets to be bowled out for 389.

Wrapping up the England innings in little more than an hour was the beginning of an ideal day for New Zealand, who then took full advantage of a pitch that is looking increasingly suited to batting.

England's bowlers remained disciplined but failed to find the swing enjoyed by their opponents and only late in the day altered their plans to attempt some short-pitched aggression.

Indeed, their two moments of success came in the space of three deliveries, with further opportunities missed through mistakes of their own making.

Durham seamer Wood impressed with pace in excess of 90mph, but will remember his first day of Test bowling for the error that prolongs his wait for a maiden wicket.

Guptill edged to Alastair Cook at first slip but was reinstated when replays confirmed Wood's foot had landed beyond the crease by the smallest margin.

Soon after lunch, Bell gave Latham a life by allowing a straightforward chance at second slip off Ben Stokes to slip through his hands.

"We were a bit sloppy in the field," England off-spinner Moeen Ali told Test Match Special. "If we took those chances it could have been a different game."

Guptill, on his return to the side after a two-year absence, played some eye-catching drives, while left-hander Latham was strong on the cut and through mid-wicket.

Their stand was worth 148 when they were parted. Moeen, curiously overlooked until the score had been pushed to 125, skidded one in to the pads of Latham, who was trapped lbw for 59.

Temporarily, England were in the ascendancy, with Ross Taylor surviving an lbw appeal first ball and almost being run out in the same over.

Reprieved, he played the supporting role in an unbroken stand of 155 with the fluent Williamson, who scored through the off side on both the front and back foot.

Moeen said: "He's a brilliant player; he's one of the best young players in the world."

Taylor had another scare, an lbw review off James Anderson, but remains unbeaten on 47 to face the second new ball, which is due three overs into the third day.

England will hope it brings the success New Zealand experienced early on day two, when Moeen edged Trent Boult behind soon after completing a half-century, with Broad following in similar fashion and Anderson patting back to Matt Henry, who took a brilliant one-handed catch.

Their recovery from 30-4 represented the highest Test score made by a team who had been four wickets down for 30 runs or fewer.

But New Zealand, with captain Brendon McCullum still to come, made it look like the home side were below par. 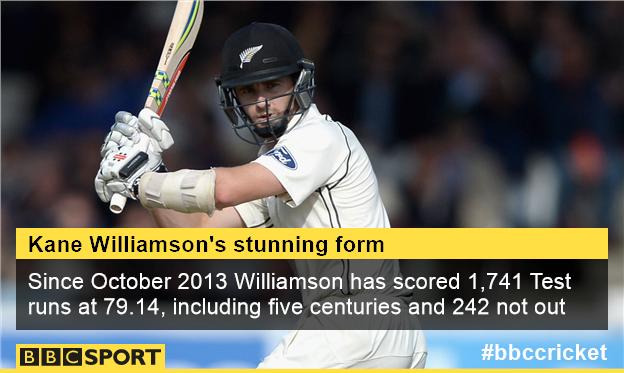