Jonathan Trott hit 42 on his return to county cricket after international retirement as Warwickshire dominated against Durham on day one at Edgbaston.

The ex-England batsman shared a stand of 84 with Ian Westwood, before falling lbw to Graham Onions (4-74).

Westwood (88) also put on 106 for the fourth-wicket with Laurie Evans (45), although both were dismissed by Onions.

However, Keith Barker remained unbeaten on 86 and Jeetan Patel was 50 not out as Warwickshire closed on 417-7.

Trott, who ended his England career in April after managing just 72 runs in six innings during the Test tour of the West Indies, clipped his first ball for four and then looked in fine form as he struck six more boundaries in his 76-ball knock. 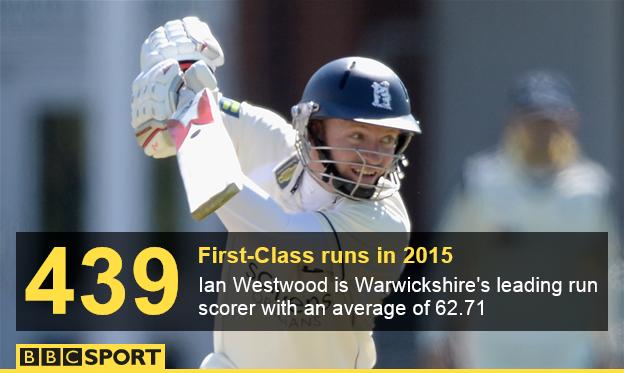 Durham made the most of overcast conditions early on as they reduced the home side to 18-2 with skipper Varun Chopra edging Onions behind and William Porterfield being trapped in front by Chris Rushworth.

Trott survived an early leg-before shout off Paul Coughlin, but then looked set for a half-century before he was dismissed by Onions two balls into the afternoon session.

The right-arm seamer swung proceedings back into balance as he bowled Westwood and had Evans caught behind as attempted to cut.

But, another century stand between Rikki Clarke and Barker and an unbeaten 87-run eight-wicket partnership between the left-arm medium pacer and Jeetan Patel, who hit his first half-century of the season, put Warwickshire in firm control.

"It felt difficult batting out there. You certainly needed a bit of luck early on and, as the ball was swinging and seaming around, we thought it was important to capitalise if the bowlers missed their areas.

"We have got some dangerous players down the order, people who like to put bat to ball, and we scored 199 in the last session.

"It just showed that if you get bowlers coming into their third or fourth spells you can cash in at the back end."