Hampshire's batsmen built a solid platform on the opening day against Middlesex at the Ageas Bowl.

Captain Jimmy Adams made 61 and Michael Carberry struck 67 but both were dismissed by James Harris (2-91).

James Vince continued his poor start to the season as he skied Ollie Rayner to Neil Dexter at deep mid-on for 27.

The wickets of Carberry and Adam Wheater after tea gave Middlesex a boost, but Will Smith remained unbeaten on 52 as Hampshire closed on 295-5.

With Middlesex's captain Adam Voges away with Australia for their tour of the West Indies, stand in skipper James Franklin won the toss and elected to bowl first.

However, his seam attack of Steven Finn, Toby Roland-Jones and the in-form Harris were unable to find an early breakthrough as Adams and Liam Dawson (36) shared an opening stand of 85.

Dexter eventually claimed the first wicket just before lunch as Dawson edged him behind to John Simpson, but after the interval Adams flourished with former England opener Carberry as the pair took the hosts to 160-1. 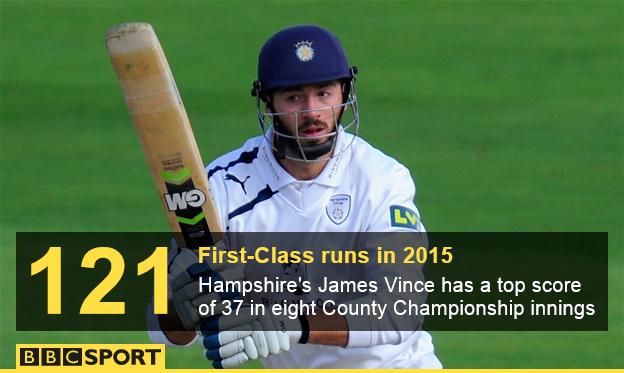 After Adams was bowled by Harris, 24-year-old Vince looked in decent touch as he struck five fours in his 38-ball innings before he tried one shot too many and was caught on the boundary.

Carberry, who brought up his fourth Championship half-century of the summer with a magnificent straight six, looked set to go on to three figures but became Harris' 31st victim of the summer when he nicked him to Franklin in the slips.

Wheater was trapped lbw by Finn with the new ball late on, but Smith saw his side through to stumps as he brought up his fifty with the final ball of the day.

"When you are put in it is always to good to come in after scoring 300, you know had a good day.

"It was very tricky conditions. (Liam) Dawson only got 30 odd but there are good 30s and bad 30s and that was a good one - I though he batted unbelievably well.

"The platform him and Jimmy Adams set helps the rest of the order. Every run in this first innings is like gold in these conditions."

"I don't think we have bowled badly at all. (Steven) Finn beat the bat a few times but saying that there weren't enough consecutive balls in the right area.

"It's one of those wickets where if you bowl in the right areas you will take wickets but if you don't it's hard to control the runs.

"We went too short and then went too full and we didn't bowl in partnerships, which let us down.

"We are still in it and we fought back well towards the end and strung some overs together."