We may only be a few rounds into the new County Championship season, but the glitz and glamour of the T20 Blast returns on Friday.

Spread over three months, the competition will feature some of the format's biggest names from overseas, including Chris Gayle, Shahid Afridi and Brendon McCullum, as well as home-grown players such as Alex Hales, Luke Wright and Jason Roy.

Reigning champions Birmingham Bears get their campaign under way with a tricky trip to Nottinghamshire and director of cricket Dougie Brown said he wanted his side to get off to a better start than in 2014 when they just scraped into the quarter-finals.

"We burgled our way through the group stage last year and that's something we need to address this time round," he told BBC Sport.

"We need to be better in the group phase."

Brown also urged his side not to rely on New Zealand skipper McCullum, who will not be arriving at Edgbaston until the end of June, after his country face England in two Tests, five one-day internationals and a T20 international.

"Brendon McCullum is a very good player who will add to what we have got, but we won the competition last year without him, so he is not coming in as a saviour," added Brown.

"If we play poor cricket before he comes, we will be out of the competition anyway.

"We have got a strategy that we adopt and we played it very well last year, so I don't see us changing a great deal. It's just a case of individuals needing to front up and do their jobs."

However, they will be without Andrew Flintoff, who confirmed he would not be returning after last year's T20 stint with the club.

Lancashire head coach Ashley Giles said he was excited by the number of overseas stars ready to play in this year's competition.

"We've seen in the Big Bash and IPL, all these big names playing and they certainly do bring the crowds in," he told BBC Radio Manchester.

The majority of matches will take place on Friday evenings, with a scattering of games at weekends and some Thursday evenings, before finals day at Edgbaston on Saturday, 29 August.

BBC Sport will be providing live text commentary for the T20 Blast on Friday evenings and there will also be radio commentary on all games.

A closer look at some of the overseas stars..... 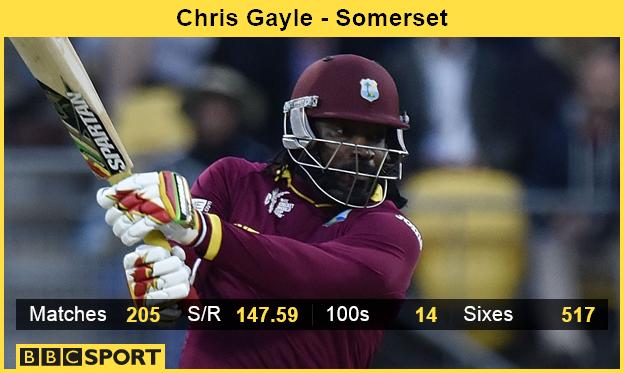 Arguably the greatest T20 batsmen in the format's short history, the big-hitting Jamaican is sure to take a liking to Taunton's small boundaries - although no boundary is big enough for Gayle when he swings that big bat.

The 35-year-old left-hander's record speaks for itself as he holds most of the T20 records. His 175 not out for Royal Challengers Bangalore in the 2013 Indian Premier League (IPL) is the highest Twenty20 score, he has hit the most T20 centuries (14) which is eight more than Brendon McCullum in second. His 517 sixes is the most by a distance and he has the highest number of runs with 7,362.

Gayle will join Somerset on either 22 May or 29 May, depending on how far his side go in the IPL, and play up to six matches before his stint finishes on 13 June. 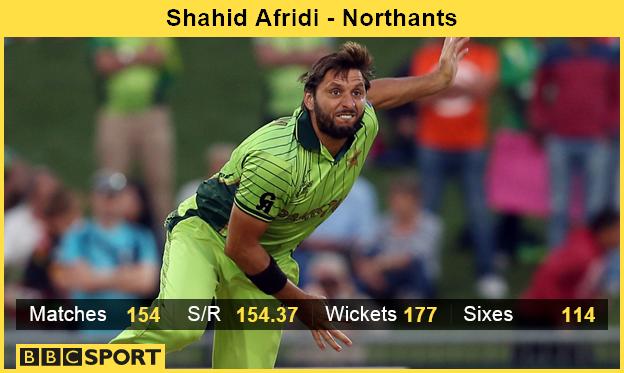 Often as frustrating as he is destructive, few players have the ability to change a match with bat or ball than Shahid 'Boom Boom' Afridi.

After making an ODI century off just 37 balls at the age of 16, the eyes of the cricketing world has been on the Pakistan all-rounder for almost two decades.

His swashbuckling style of batting where he thinks every ball can go for six does not always pay dividends, but when he does stay in for any length of time he can quickly take the game away from the opposition.

Now aged 35, Afridi's leg-spin bowling is seen as his main asset and his variety in pace often bamboozles batsmen. He will play in Northants' first six games. 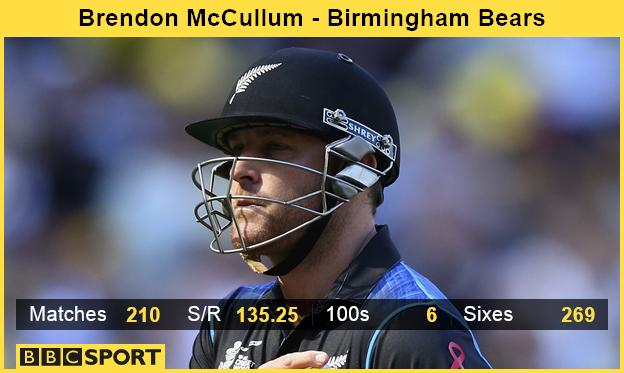 The New Zealand captain has enjoyed a memorable 18 months, scoring a Test triple hundred, leading his national side to their first World Cup final and cementing his place as one of the world's best T20 batsmen.

McCullum has become even more attacking with age and intent on smashing opposition bowlers to all parts of the ground inside the opening six overs of a Twenty20 match.

The 33-year-old has signed a seven-game deal with the Bears and will arrive at Edgbaston after the Black Caps tour of England finishes.

His first game is scheduled to be against Lancashire Lightning at Old Trafford on Friday, 26 June.

Who can provide the home-grown spark? 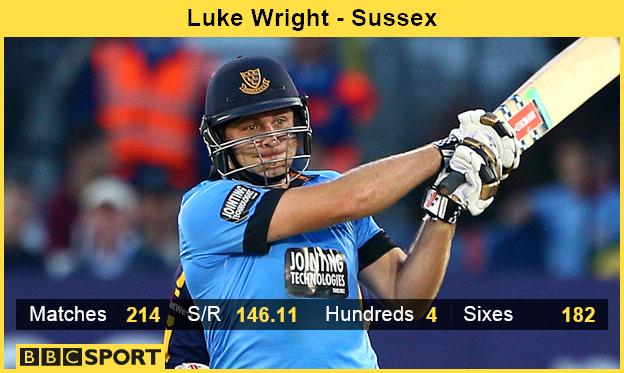 The Sussex T20 skipper has urged his side to take some risks and the 30-year-old will certainly be at the forefront of that.

He has become one of the most dangerous opening batsmen in the game with an attacking intent from ball one. 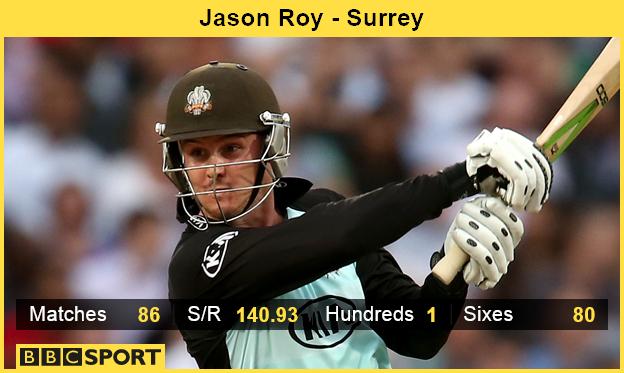 Among all the Surrey stars, Jason Roy was the name on everyone's lips last summer as he notched up nine fifties in the competition and ended as the leading run-scorer with 677 runs.

The 24-year-old goes into the competition on the back of a 28-ball half-century, which helped his side chase down 216 in less than 22 overs against Leicestershire in the County Championship.

Roy has emerged as one of the most exciting talents in the game. 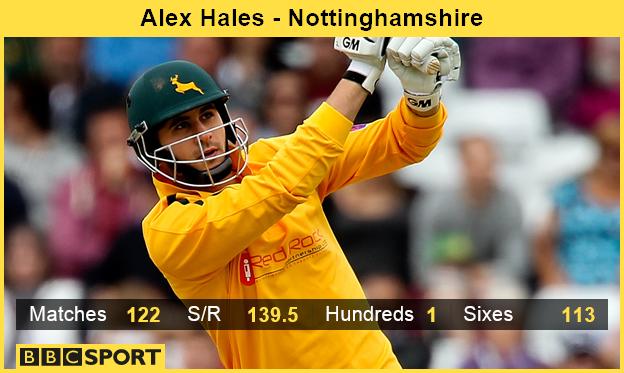 Alex Hales has been in the form of his life at the start of this summer notching up more than 500 runs for Nottinghamshire in the Championship, including a career-best 236 against Yorkshire.

Few can match the 26-year-old's six-hitting ability as he proved when he scored an unbeaten 116 from 64 balls against Sri Lanka in the 2014 World Twenty20 in Bangladesh.

He is jetting off for a short-term stint with the Mumbai Indians in the IPL, but he will once again be a key figure as Notts look to lift their first T20 trophy.