Somerset were bowled out for just 90 as Worcestershire won by an innings and 62 runs inside three days at New Road.

Somerset captain Marcus Trescothick was bowled by Charlie Morris (4-38) with just the second ball of the morning before the visitors collapsed to 36-6.

Jack Shantry then ran through the tail with 4-15 as Somerset were bowled out just after lunch.

The victory was Worcestershire's first of the season in Division One, while Somerset have lost three in a row.

Worcestershire seamer Morris, who took five wickets in the first innings, was once again instrumental in the morning session as he sent Trescothick, Johann Myburgh and Tom Cooper back to the pavilion inside the opening half hour. 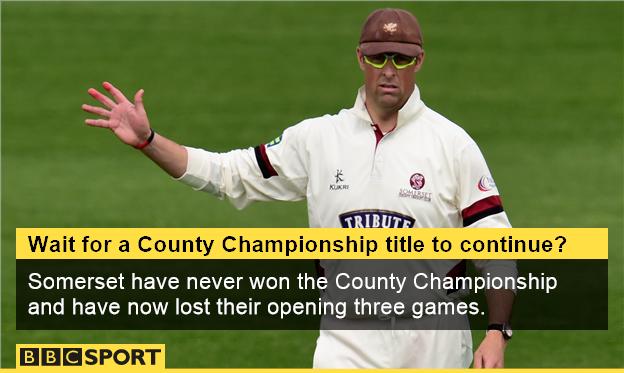 With Somerset needing 152 to make the hosts bat again, all-rounder Joe Leach, on the back of his innings of 95 on day two, then bowled Jim Allenby and had Alex Barrow caught at slip as they slumped to 19-5.

Morris, who was educated in Taunton, then removed an attacking Peter Trego when he wafted at a leg-side delivery and was caught by Sachithra Senanayake as Somerset found themselves six down and still trailing by 116.

James Hildreth (35) gave the visitors some hope of avoiding an innings defeat, but Shantry had other ideas as he trapped him lbw.

The left-armer then picked up the final two wickets in his next over to complete a remarkable win with more than a day and a half to spare.

"I am really pleased. It has been a tough start to season and two defeats have hurt us but we have played some reasonably good cricket throughout.

"Somerset are also going through a tough start to season but they are a Division One battle-hardened side so to beat them is exciting and I'm really proud of the team.

"We've got a good dressing room so that's always going to help us anyway. The young lads are scoring runs for us and this win will give us confidence.

"We all know how tough Division One is going to be for us and to win a game early in the campaign is really important for confidence."

"I feel a little bit shell-shocked. We haven't performed anywhere near the level that we expect as a team for the three days.

"We have been slightly off the boil so we have got a little bit of soul-searching to do. You can't carry on in that vein because it's not good enough.

"There are areas for us in quite a few departments that we can improve on. Our challenge is to get it right by the next game we play."