Middlesex seamer James Harris took 9-34 to help skittle Durham for 71 and bowl his side to a 187-run win at Lord's.

The Welshman claimed the first seven wickets before Steven Finn removed Usman Arshad, but Harris returned to pick up the final two and finish with his best first-class figures.

Durham resumed on 24-2, chasing 259 to win, but Harris took five wickets for just nine runs in the first half hour.

Their total of 71 was Durham's second lowest in their first-class history. 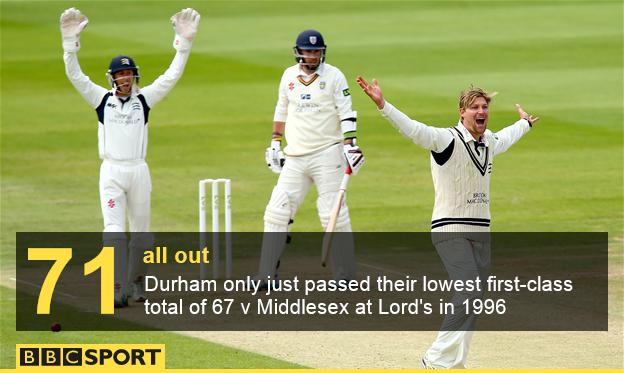 Harris had claimed the scalps of Keaton Jennings and Mark Stoneman in the final session of day three following Middlesex's own dramatic second-innings collapse, which saw them bowled out for 89.

And the 24-year-old continued where he had left off as he bowled Michael Richardson in the second over of the day before trapping Calum MacLeod lbw and bowling Paul Collingwood for ducks off consecutive balls in his next over.

Paul Mustard survived the hat-trick delivery, only to be caught at third slip by James Franklin in the ex-Glamorgan man's next over, which also saw Scott Borthwick perish for 14 - the top score of the innings.

Harris was denied the chance to become the sixth Middlesex bowler in history to take 10 wickets in an innings, as Finn had Arshad caught bat-pad, moments after he had launched him over cover for six.

However, Harris soon removed John Hastings lbw for nought and had Chris Rushworth caught behind to pick up his first nine-wicket haul and finish with his best match figures of 13-103.

It has been a dramatic turnaround in form for the Swansea-born bowler who, having taken just 12 Championship wickets in seven matches last season, is the leading wicket-taker so far this campaign with 26 scalps.

"We were in a pretty strong position and felt we needed a couple of early wickets.

"I managed to get those and got on a roll. It was thrilling to be part of it.

"It has been a long time coming but I'm really happy. I have felt all season I have been bowling nicely and there was still something to click. It probably happened this morning.

"I got into a nice rhythm, albeit into a gusty wind, although it didn't play too much of a part. We are very pleased to have had a good win against a strong Durham team."

"It was an incredible game. After the first couple of days we thought it was one of the flattest wickets we've played on at Lord's and we should be disappointed we didn't get closer to their first-innings score.

"The last two days have just been utter carnage if you've been a batsman. There's been some exceptional bowling from both sides.

"For Johnny Hastings and Chris Rushworth to drag us back into the game like they did was a superb effort, and then obviously, James Harris' nine-for, that doesn't happen by fluke. That's serious bowling, utilising the conditions and putting batsmen under pressure every single ball."