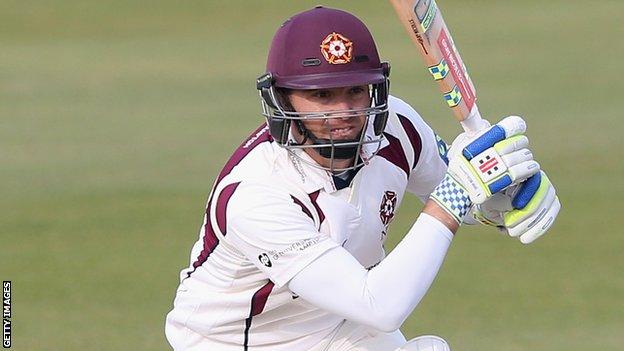 Stephen Peters (59) and captain Alex Wakely (56) each hit a half-century to guide Northants to 198-6 at the end of a weather-interrupted day.

The pair shared a second-wicket stand of 105 which was the highlight of the day for the hosts who lost quick wickets in the middle order.

Play was finally ended early after bad light forced the players off.

Lancashire captain Steven Croft, standing in for Tom Smith, put the hosts in after winning the toss but the visiting attack bowled too short early on as Northants reached 120-1.

However they improved later in the day and were given a late boost as Rob Keogh and Josh Cobb were dismissed in successive balls in fading light just before the players were taken off for the final time.

"We want our top order to try and get the big hundreds we're looking for. Unfortunately, we're not getting there yet but if Rossington, Keogh and Willey keep coming in and playing their shots, we're going to be in a great position.

"You could see it happening out there. It was so dark. It was a little unfair but you have to do what the umpires tell you. It just didn't happen and on this occasion I think they got it wrong,"

"Tom Smith's got a disc problem and it looks like he's got a couple of bulging discs in his back. We're not exactly sure of the course of action or the prognosis now.

"It's not terminal I'm sure, by any stretch of the imagination, but it's clearly a concern to all of us, including Tom."