Yorkshire preserved their 12-month Championship unbeaten run after batting out for a draw against Warwickshire.

The White Rose county were set 352 to win after the visitors declared on 219-7, Ian Westwood having made 84.

Westwood fell just 16 short of becoming the first player to score two centuries in a first-class match at Headingley.

Reigning champions Yorkshire have not lost a Championship game since they were beaten by Middlesex at Lord's in April 2014.

Having been on top for much of the match, any hopes Warwickshire had of victory were reduced after flurries of rain and sleet saw an early lunch taken. 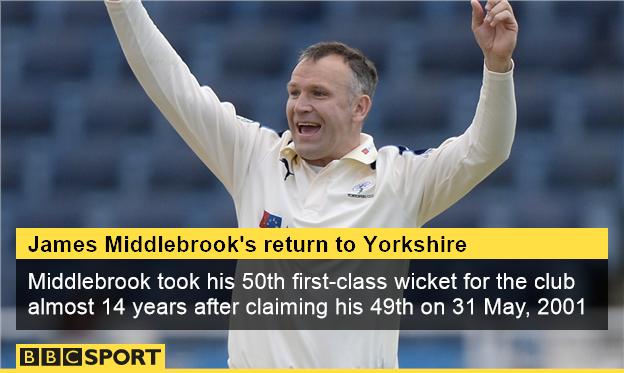 Westwood advanced from his overnight score of 48 before falling lbw to James Middlebrook, one of five victims for the 37-year-old who marked his return to Yorkshire colours with a haul of 5-82.

Rikki Clarke tried to move the game along with an aggressive 36 off 21 balls, before Yorkshire batted responsibly to stave off the prospect of defeat.

All six home batsman who reached the crease made at least 20 before Hodd posted his half-century off 92 balls.

Needing to take six wickets in the last eight overs, Warwickshire threw the ball to Westwood but his batting form was not matched by his part-time off-spin and he failed to add to his career tally of seven first-class wickets.

"We would have gone pretty hard for 10 overs after tea, but to lose Cheteshwar Pujara and Andrew Gale in quick succession changed the situation and I thought that Jack Leaning and Andy Hodd were then outstanding in assessing the situation.

"I am not criticising Warwickshire's tactics but they had a safety first attitude and it was clear that they wanted to try to bat us out of the game.

"We worked out their game plan on the third afternoon when they went at under three an over and that is what happened.

"I was very satisfied with how we played but there is still room for improvement."