The world has been paying tribute to Richie Benaud, the former Australia captain and iconic cricket commentator, who has died aged 84.

A pioneering leg-spin bowler, Benaud played in 63 Tests, 28 as captain, before retiring in 1964 to pursue a career in journalism and broadcasting.

His final commentary in England was at the 2005 Ashes series but he continued to work in Australia until 2013.

In November, Benaud revealed he was being treated for skin cancer.

Marylebone Cricket Club said they had lowered the flag on the North Clock Tower at Lord's as a mark of respect for a figure "universally liked and respected across the world of cricket".

The Australian government has offered to hold a state funeral for Benaud, who enjoyed a long association with the BBC following his first radio appearance for the corporation in 1960.

"Richie was not just a great cricket commentator, he was one of the finest sports commentators of his generation," said Barbara Slater, director of BBC Sport.

"He was an integral part of the BBC team for decades and will be sorely missed by everyone who had the pleasure of working with him."

'The iconic voice of summer'

Benaud was revered for an outstanding playing career in which he took 945 wickets in 259 first-class matches and made 11,719 first-class runs, scoring 23 centuries at an average of 36.50.

Cricket Australia chairman Wally Edwards: "Richie stood at the top of the game throughout his rich life, first as a record-breaking leg-spinner and captain, and then as cricket's most famous broadcaster who became the iconic voice of our summer."

Australia prime minister Tony Abbott: "A sad day for Australia. We have lost a cricketing champion and Australian icon. What an innings. RIP Richie Benaud."

Sri Lanka wicketkeeper Kumar Sangakkara: "So sad to hear about the passing of Richie Benaud. The great voice of cricket is no more. He defined an era with conviction and sincerity."

Australia coach Darren Lehmann: "Our thoughts are with the Benaud family at this time, RIP one of the game's all-time greats. He will be missed by the whole cricketing world."

"An absolute bobby dazzler" - listen to some of Benaud's classic commentary.

'A true giant of the modern game'

Benaud was the first man to achieve 2,000 runs and 200 wickets at Test level, and was a highly regarded tactician. He never lost a Test series as Australia captain, winning five and drawing two.

England and Wales Cricket Board chairman Giles Clarke: "Cricket has lost perhaps its greatest advocate and someone who was a true giant of the modern game."

Australia's record wicket-taker Shane Warne: "Dear Richie, you were a legend on all levels and rightly so too. As a cricketer, commentator and as a person, you were the best there's ever been and to top it off, an absolute gentleman. For me it was an honour and a privilege to call you a close friend and mentor."

'An absolute gentleman, a master craftsman'

Following his impressive playing career, Benaud became even better known as a prolific author, columnist and commentator on cricket.

After the 1956 Ashes tour in England, he completed a BBC training course while still a player, marking the beginning of a 40-year association with the corporation.

Former India captain Anil Kumble: "His values cut across all generations and was the best example in cricket to everyone associated with it. Always had a kind word for every cricketer. Above all a great human being. Had a special place for every leg spinner. Very sad day for cricket."

'Peerless, well-loved, a legend and an icon'

After his retirement he often spoke of a return to commentary but, to the great sadness of his legions of admirers, it did not materialise.

Former Australia batsman Justin Langer: "As a player alone he left a great legacy but as a commentator his gestures and his language were peerless. Wise men often don't inundate you with words but when they speak you listen to everything they say."

Australia captain Michael Clarke: "He was a great player and a great captain, a wonderful leader of men and I think he's continued that off the field. He played the game in the right spirit and all of us look up to Richie so it's a really sad day."

'A gentle authority, an understated humour'

ABC's chief cricket commentator Jim Maxwell: "He was one of the driving forces behind the enthusiasm for cricket in this country over the last 30 or 40 years.

"He has been an amazing influence for all those people who have followed the game and loved it for a long while because he always spoke with authority, a gentle authority, and with an understated humour."

BBC Sport cricket correspondent Jonathan Agnew: "He was the face of my childhood and for millions of others. He was cricket on the TV in England. He was our Richie - and that is the ultimate compliment for an Australian."

'What a marvellous innings you had'

Formula 1 commentary legend Murray Walker: "Richie's personality was distinctive and unique. He was an extremely nice man who had a wonderful, laconic, laid-back style, and a brilliant cricketing knowledge which he communicated so well.

"He won everything you could possibly hope for in cricket and had this superb gift of being able to put his knowledge into meaningful and entertaining words."

"So many commentators speak in clichés or statistics and they really don't embrace the game or the people watching and they don't enhance it. You couldn't fail to recognise the voice of Benaud."

Hollywood actor Hugh Jackman: "We lost a legend today - Richie Benaud. We will never forget you."

Oscar-winning actor Russell Crowe: "RIP Richie Benaud. My deep gratitude for all you gave to the sport of cricket as a player and as a broadcaster. Sad, sad day."

Former England captain Sir Ian Botham: "World Cricket will miss one of the greats Richie Benaud. On the field, in the commentary box and on the golf course! An iconic gentleman."

'The voice we all loved when we were kids' 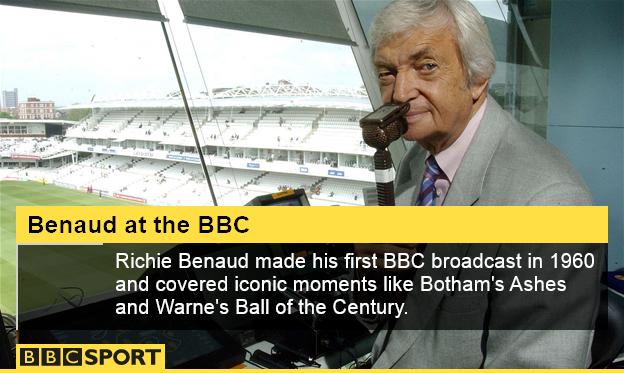 Legendary BBC commentator Barry Davies: "He was the best TV commentator during the time I've been working, and before. He brought his enthusiasm and knowledge to the job but also took the time to learn.

"He could be pithy, had a nice sense of humour, and he talked to people, not at people. He was very keen to give an opinion if it was justified but never forced it on you; what he said was in addition to the picture. He was a wonderful, impressive figure."

Former England captain Mike Atherton, wrote in The Times: "He recognised that times change and comparisons are pointless. Because of that, the modern players loved him. He was loved. For longer than people care to remember he was the voice of the English summer, just as he was in Australia."

Former South Africa captain Graeme Smith: "I grew up with his voice in my ears. On my first trip to Australia he was the man I was most nervous to meet."

Benaud, who was appointed OBE in 1961 for services to cricket, leaves a wife of 48 years, Daphne, and two children from his first marriage.