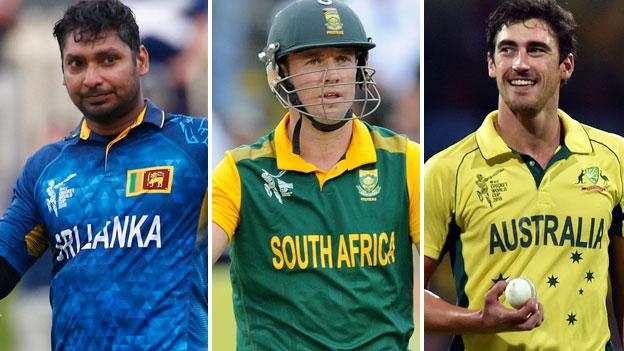 Australia beat New Zealand in the World Cup final on Sunday to complete a tournament littered with outstanding individual performances.

In advance of the showpiece, the Test Match Special experts got their heads together to pick their team of the tournament.

And although there were three Englishmen on the panel, unsurprisingly not a single England player made their team.

The International Cricket Council's team of the tournament, named one day after the final, featured exactly the same 11 players, with Zimbabwe's Brendan Taylor as 12th man.

Take a look at the final XI, and have your say in the comments section below or via #bbcworldcupXI.

Listen to a Test Match Special podcast of the team of the tournament debate.

Explosive. It's a powerful word, but one that still doesn't do full justice to the incredible impact of New Zealand's captain at the top of the order. He mauled Steven Finn in the group phase, but it was his ruthless dismantling of South Africa paceman Dale Steyn in the semi-final that provided one of the tournament's most electrifying episodes.

On the rare occasions when McCullum hasn't fired, Guptill invariably has. He ended a patchy run of form with 105 in a tight run chase against Bangladesh, then shattered Chris Gayle's record for the highest World Cup score with an astonishing 237 not out in the quarter-final victory over West Indies.

How do you replace the irreplaceable? Kumar Sangakkara bowed out of one-day cricket by becoming the first player to score hundreds in four successive World Cup matches. A master of making every ball count, his 117 not out against England was a study in controlled brutality.

Unorthodox, but incredibly effective, Steve Smith has continued his golden Australian summer by becoming the lynchpin of his team's batting line-up at the World Cup. He was the first Australian to score a World Cup semi-final hundred and the player to score at least 50 in five consecutive World Cup innings.

A force of nature. De Villiers lived up to his billing as the most destructive batsman in the game with the fastest 150 in one-day history from 64 deliveries against West Indies. He followed that with blistering fifties against Pakistan, the UAE and New Zealand and was the epitome of energy and athleticism in the field.

If Kevin Pietersen is the kind of player who empties the bars, Glenn Maxwell can turn a grown man sober. His 102 off 53 balls against Sri Lanka was an annihilation, while his handy off-spin has allowed Australia to play without a front-line spinner. The 'Big Show' just got bigger.

An exceptional all-round performance from the 24-year-old New Zealander with arms like tree trucks. Whether he was snaffling crucial wickets with his brisk left-arm seam bowling or crashing lower-order runs, he contributed something in every match and scored a crucial 58 in their semi-final win over South Africa.

Even in his 20th year as a professional cricketer, Vettori remains a match-winner. He was the catalyst to Australia's collapse in their riveting group game, by taking two crucial wickets in a miserly spell, and destroyed the part-timers of Afghanistan with extraordinary figures of 10-4-18-4. And rarely can a score of seven not out have been as telling as Vettori's in the Kiwis' semi-final run chase.

A one-man wrecking ball, Mitchell Starc eclipsed his more celebrated team-mate Mitchell Johnson with devastating left-arm pace bowling at the beginning and end of every innings. He has taken at least two wickets in every match at a truly remarkable economy rate of 3.65 and will be hoping to repeat his six-wicket haul against New Zealand when the teams meet again on Sunday.

Boult has underlined his status as one of the most exciting young bowlers in international cricket by spearheading the New Zealand attack with aplomb. The left-arm quick has a tournament-leading 21 wickets and has bowled a staggering 14 maidens - twice as many as anyone else in the World Cup.

Like Starc, Morkel has outbowled an illustrious compatriot, taking six more wickets than Steyn in South Africa's run to the semi-finals. A consistent menace, his tears at the conclusion of the Proteas' agonising defeat by New Zealand told of a man who had left everything out on the field.

The standout performer in an India team that took all 10 wickets in every match until the semi-final. He claimed three or more wickets in four of his first six matches but came unstuck against Australia and was narrowly edged out by Morkel in the final XI.