Throughout the World Cup, a television advertisement has featured Brendon McCullum telling his country to "dream big, New Zealand".

As the crowds streamed towards the stadium known as the Cake Tin on a gloriously sunny Saturday afternoon, it seemed like the message of the Black Caps captain was getting through.

By the time they drifted away into the Wellington night, having seen the Martin Guptill-inspired Kiwis destroy West Indies to earn a place in the semi-finals, the dream was fast becoming a reality.

Guptill's unbeaten 237 was the highest score in a World Cup match, the second biggest in one-day internationals and the fourth best in all List A cricket.

He broke his own record for the highest score by a New Zealander, becoming only the second man to hit a World Cup double ton and the fifth to do so in all ODIs.

It was a New Zealand performance befitting the excitement in a country where the World Cup feels like a bigger deal than across the Tasman Sea in Australia.

Whereas Australia has struggled to fill its vast grounds, New Zealand has matched size of venue to magnitude of match to be rewarded with capacity crowds and lively atmospheres.

And while Australia's larger cities have few reminders that the World Cup is in the area, New Zealand's smaller towns are plastered with paraphernalia.

In a rugby-obsessed nation, cricket is on the television in takeaways and hotel lobbies. Shop windows are given over to cricket-themed displays, while Black Caps flags flutter on the forecourts of a used-car dealerships.

In Dunedin, the city of McCullum's birth, the road leading to its University Oval has been renamed 'Brendon McCullum Drive'.

As for Guptill, he already appears to be living the dream - but it is one that was almost over before it began.

At the age of 13, he was involved in a forklift accident that caused him to lose three toes. As the aspiring cricketer recovered in hospital, his father arranged for former New Zealand skipper Stephen Fleming to pay him a visit.

"Back then I didn't think I would ever play for New Zealand," said Guptill, sensitively nicknamed 'Two Toes'. "I'm lucky enough to represent my country and I'm loving this moment."

Some 15 years later, a merciless assault on the West Indies bowling etched the tall right-hander into New Zealand cricket and World Cup folklore.

Not that the early signs were good. He needed the good fortune of Marlon Samuels dropping a straightforward shin-high chance at square leg in the first over and had to weather the storm of losing more illustrious partners McCullum and Kane Williamson.

However, with the confidence of a century in his last innings against Bangladesh, Guptill built by driving pacemen down the ground and cutting the spinners through the off side.

As he approached 200, the crowd began chanting his name.

When the double century came, the roar was so loud it was as if the whole of New Zealand was celebrating, Guptill's helmet-off, double-armed celebration providing perhaps the moment of the World Cup so far.

In the same Andre Russell over, another boundary took Guptill past Chris Gayle's World Cup best of 215.

Gayle, whose record stood for only 25 days, congratulated Guptill between overs, offering a handshake and telling him "welcome to the club".

Then came the shot that the innings will be best remembered for - Russell forgetting to use the pitch, Guptill swinging to leg, white leather becoming a dot in the sky and landing on the roof of the stand.

Guptill removed his glove and held two fingers to Craig McMillan, telling his batting coach that he had now managed more hits on to the roof of the Cake Tin. As a couple of figures in black walked around the top of the stadium in an effort to find the ball, the word "roof" trended on Twitter.

The crowd continued to shout his name as he strode off at the end of the innings and remained vocal when he reappeared to be interviewed on television.

"I'm incredibly proud of what happened today," said Guptill. "It's pretty cool to hear the whole stadium chanting your name - I've never had anything like that before."

There were more reasons for noise as the Black Caps sprinted towards victory: Trent Boult taking four wickets to become the tournament's most successful bowler, Daniel Vettori urging his 36-year-old, injury-ravaged body into a Michael Jordan-style leap for a one-handed catch on the third-man boundary.

The Black Caps have rewarded the nation's enthusiasm with seven successive wins in this tournament and the real sense that their seventh World Cup semi-final against South Africa in Auckland on Tuesday could finally produce a place in the final - and even the trophy.

"That would make the nation throb with pride," said Coney. "Success and being in the spotlight doesn't usually sit well. Our style is to be a bit more humble. Talking ourselves up isn't really the New Zealand way."

Maybe, though, the New Zealand way is about to change - especially if a country with a population smaller than that of Yorkshire were to hold both the cricket and rugby union World Cups at the same time.

"Wouldn't that be nice?" suggested Coney, with typical Kiwi understatement.

Perhaps it really is time to dream big, New Zealand. 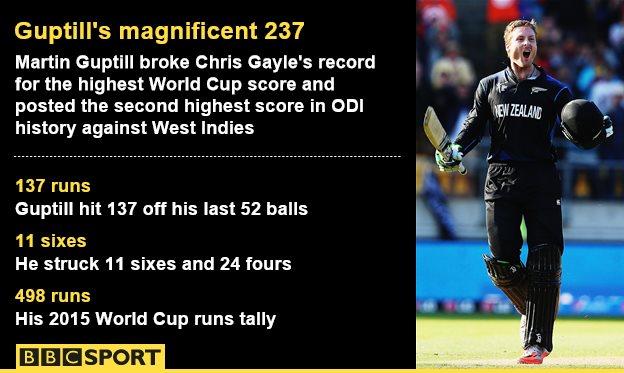