Jonathan Trott has been recalled to the full England squad for the first time since leaving the 2013-14 Ashes tour because of a stress-related condition.

The Warwickshire batsman, 33, was named in a 16-man party for the three-Test tour of West Indies in April and May.

All-rounders Chris Woakes and Moeen Ali are both ruled out due to injuries suffered during the World Cup.

The trio are the only players yet to be capped at Test level in a squad captained by Alastair Cook.

Trott scored 3,763 runs in 49 England Tests before leaving Australia after the first Test in Brisbane in November 2013 due to a long-standing anxiety condition.

Having started the 2014 season with Warwickshire, his county campaign was interrupted when he took another break from the game in April.

But, following sessions with psychiatrist Dr Steve Peters, he returned to the Bears side in May, ending the summer with 628 first-class runs.

He made a triumphant return to international colours in January, scoring a double hundred as captain of England Lions in South Africa.

National selector James Whitaker said: "Jonathan Trott is a player of proven international pedigree and we are delighted to welcome him back into the squad." 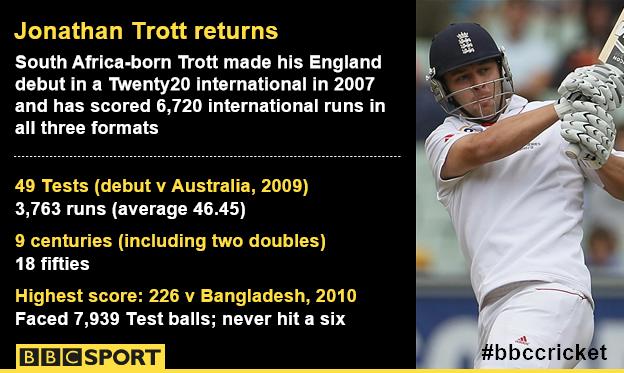 What are the experts saying?

BBC cricket correspondent Jonathan Agnew: "Trott's easiest route back into the Test team would be as Cook's opening partner.

"His return to the fold after his period on the sidelines will be a great boost to any flagging morale.

"How he will fare remains to be seen. He will have to answer searching questions about his technique against hostile fast bowling and if he can reassume his calming presence once more, England will benefit."

Former England captain Michael Vaughan: "Jonathan Trott coming back doesn't surprise me. He was the standout player in the Lions trip, and I am sure they have done all the research on the issues that he had.

"The only thing that surprised me was that he did not open in South Africa. I thought they would use that tour to at least have a look at Jonathan Trott at the top of the order in one of the games.

"He did struggle against the short ball the last time he was in the England team, and the pace options from the likes of Mitchell Johnson and Ryan Harris. I think other teams around the world will continue to target him with short stuff into the body.

"That is something he will have to work on, but if you ask me whether I would take the gamble, I would. I think England are a better team with Jonathan Trott playing well."

Who are the new faces?

Adil Rashid, 27, played five one-day and five Twenty20 internationals for England in 2009, featuring in the World Twenty20. He was in the Test squad for the tour of West Indies that year, but did not earn a cap. He was recalled to the Lions squad after starring in Yorkshire's 2014 county championship success.

Adam Lyth, 27, was also instrumental in Yorkshire's title-winning side. The Whitby-born left-hander, who had football trials with Manchester City as a teenager, scored six hundreds and six fifties at an average of almost 70 to earn a place on the Lions tour.

Mark Wood, 25, made his first-class debut for Durham in April 2011 after playing minor counties cricket for Northumberland between 2008 and 2010. The right-arm fast medium bowler impressed during their 2013 and 2014 campaigns and on the Lions trip to South Africa.

"If Mark can keep himself fit he will do well," said BBC Newcastle's cricket commentator Martin Emmerson. "He is also deceptively fast, coming in off a short run-up, with a 100 metres sprinter-style start. It's very much upper body strength with him which surprises some batsmen."

The men who miss out

Woakes suffered a left third metatarsal stress reaction that ruled him out of England's final World Cup match against Afghanistan. He is out of the entire tour but is expected to be available for selection when England take on New Zealand in a two-match home Test series in May.

Moeen has a side injury, but will be monitored and may be drafted in for the latter stages of the tour.

Robson hit a century against Sri Lanka in his second Test last summer but reached fifty only once in seven innings against India as his faulty footwork was repeatedly exposed by their seam attack. He then managed only 46 runs in three innings for the Lions in South Africa.

Finn has not played Test cricket since the first Ashes Test at Nottingham in 2013. He was brought back into the one-day team last year but struggled at the World Cup and was dropped after England's first four matches.

Unsurprisingly, Kevin Pietersen's pleas for an England recall have so far fallen on deaf ears. Pietersen told Test Match Special on Wednesday that he would "do anything" to get back into the side.