"It is tough to leave international cricket on a day like this," said Jayawardene, 37.

Sangakkara, 37, added: "Disappointments are part of our careers. You have to take them on the chin."

Sri Lanka were bowled out for 133 at the Sydney Cricket Ground, with Sangakkara making 45 and Jayawardene four. South Africa then chased the target for the loss of only one wicket in 18 overs.

"I will have time to look back through my career and maybe in a few months' time it will be nice to look back at the memories," said Jayawardene.

"But it is disappointing to finish off like this."

Sangakkara ends his ODI career on 404 caps and with 14,234 runs, a tally second only to Sachin Tendulkar. His 482 dismissals is more than any other wicket-keeper.

The pair, both former national team captains, hold the record for the highest partnership in Test cricket, 624 for the third wicket against South Africa in 2006. 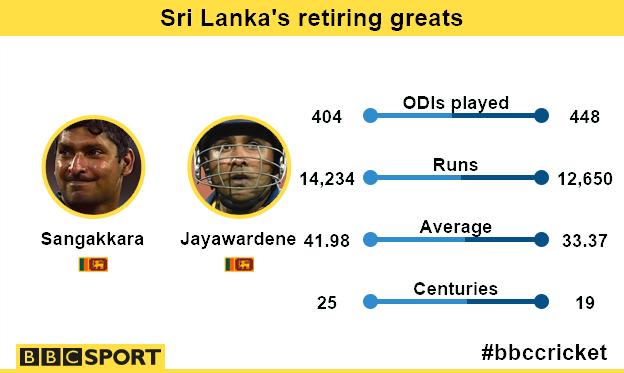 "On behalf of the nation and the team, I thank them for their invaluable service," said current Sri Lanka captain Angelo Mathews.

"The best thing for us would have been to go to the final and win it for them but it was not to be."

Sangakkara will retire from international limited-overs cricket after a World Cup where he became the first man to score a hundred in four successive one-day internationals.

"There's tape holding my fingers together and a lot more holding my body together," said the left-hander, who will continue to play Test cricket and will play for Surrey in this summer's county championship.

"Retiring is not about form. I'm sure I could play a year or two more, but the time is now and it's right. I'm pretty happy with the decision I've made.

"A lot of greater players than me have gone and the game has continued, other players take that mantle. In my case, it won't be any different."

Jayawardene, who made his international debut in 1997, is set to play T20 cricket for Sussex in the coming season.

"I will sit and enjoy my life," he said. "It has been a good 18 years and there have been no regrets, but it is time to look for different challenges.

"Our time has done and we must leave with peace and enjoy what we have achieved."