Captain Eoin Morgan says he has "no regrets" despite England being knocked out of the World Cup in the first stage.

A campaign that saw England lose four of their six games ended with a nine-wicket win over Afghanistan in Sydney.

"There are no regrets, absolutely not," said Morgan. "We've given it everything, including myself.

England were beaten by Australia, New Zealand, Sri Lanka and Bangladesh to suffer a first-round elimination for the third time in the past five World Cups.

Their record of only two wins matches their joint-worst performance of 1996, a tournament at which they reached the quarter-finals. 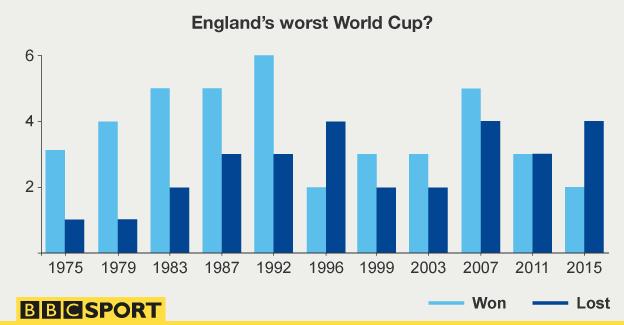 But 28-year-old Morgan said he expects all of the 15-man squad to be considered when they resume playing one-day cricket in the English summer.

When asked if he thought if it was time to start building for the 2019 World Cup, he replied: "No, absolutely not.

"We haven't got guys who are coming to the end of their careers, so I don't see a reason for that.

"Guys on the outside need to be banging down the door. When we're not doing well, it's easy to say that someone outside the squad is better suited."

Morgan, who took over as captain from Alastair Cook in December, wants to continue as skipper, but there will be a "review" when England return home.

"My experience as captain has made me a better player and better person and I've learnt a lot about the team and my own performance," the Middlesex batsman told Sky Sports.

"With regards to the captaincy, the decision is out of my hands."

The Dublin-born left-hander said some of the criticism aimed at coach Peter Moores was "unfair" and called for more emphasis to be placed on one-day cricket in England, perhaps with the introduction of limited-overs central contracts.

"Test match cricket has to remain a priority," said Morgan. "But there has to be a change because we haven't had success at World Cups.

"Central contracts have probably improved us as a Test nation, so if they did the same for one-day cricket, it would be well received."