Sri Lanka batsman Kumar Sangakkara will not reconsider his decision to retire from ODI cricket after the World Cup despite his record-breaking form.

The 37-year-old confirmed to BBC's Test Match Special that he would play no more ODI cricket after the tournament.

"Retirement is not about form, it is about time and place and whether it feels right," he said. 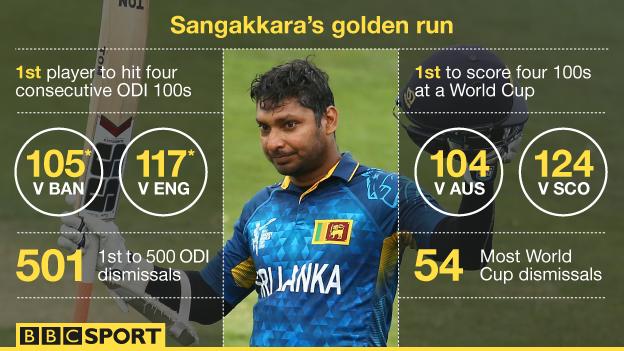 Sri Lanka captain Angelo Mathews said after the 148-run Pool A victory at Bellerive Oval, Hobart that he had been "on my knees begging" Sangakkara to continue his limited-overs career after the World Cup.

However, when asked if his current run of form would prompt a re-evaluation, Sangakkara said: "No. It is never about whether you can play or not."

The Sri Lanka wicket-keeper, who made his ODI debut in 2000, says the physical effects of the game are starting to take their toll.

"I've been batting and keeping for a long time, it's getting harder and the joints are creaking and aching, but I consider myself lucky to be part of a great team," he said.

Sangakkara recorded his fifth World Cup century, one behind the record of six held by India's Sachin Tendulkar, as Sri Lanka confirmed their place in the quarter-finals of the World Cup with an emphatic victory over Preston Mommsen's side.

After Sangakkara's fourth successive century, ex-Australia wicketkeeper-batsman Adam Gilchrist, who saw his record for the number of World Cup dismissals overtaken by the Sri Lankan, tweeted: "I scored four 100s in a row once... shame it was on the golf course! @KumarSanga2 congrats on 500+, WC record and runs, runs, runs #legend."