When the sorry story concluded under a pink Adelaide sky, it was hard to remember that it has not always been this way.

The clatter of James Anderson's stumps and the blur of green Bangladesh celebration marked the end of another disappointing World Cup campaign, but there was a time when England were quite good at one-day cricket.

The 1992 tournament, held in Australia and New Zealand, was the competition that invented modern one-day cricket - coloured clothing, white balls, pinch-hitters, innovation. It was also when England's success ended.

Since then, they been eliminated in the first round of the World Cup on three occasions and have failed to win a single match in the knock-out stages.

With yet another period of soul searching and "blank sheet of paper" planning under way, how can England fix their one-day team in time for a home World Cup in 2019?

Despite their calamitous exit, England have in batsmen Jos Buttler, Joe Root, James Taylor and Moeen Ali a handful of players on which a one-day team could be built.

But how do they replace opening bowlers Anderson and Stuart Broad, both of whom seem unlikely to be playing ODIs in 2019?

All-rounder Ben Stokes is certain to come back into the reckoning, maybe with Kent batsman Sam Billings and Yorkshire leg-spinner Adil Rashid, but there is a paucity of fast-bowling options in the county game. 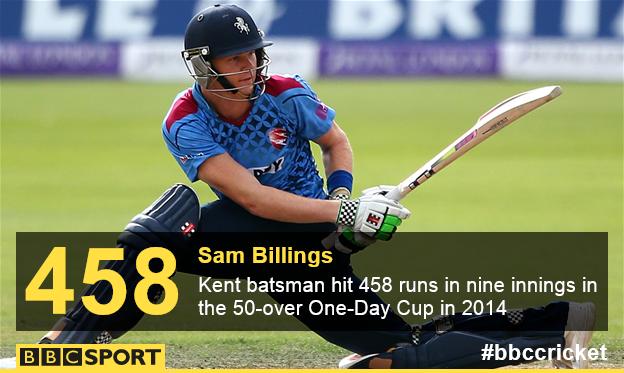 "We have good players and we need to give them time to develop," said former England captain Alec Stewart. "Stokes, Billings and [Surrey batsman] Jason Roy are game changers. They will make errors but they will develop.

"Can we get those three into the England set-up and give them the freedom to do what they do for their counties?"

…and strive for continuity

England played nothing but one-day cricket for five months in the run-up to the World Cup, even altering the Ashes schedule to aid preparations by touring Australia last winter.

That still did not stop them from making more major changes for the opening games against Australia.

Taylor, who had enjoyed success at number three, was dropped down to six to accommodate Gary Ballance, a man who had not played a one-day international since September. Broad opened the bowling instead of regular opening bowler Chris Woakes.

"It wasn't a World Cup that sneaked up on us and said 'boo'," said former England pace bowler Matthew Hoggard.

"We shot ourselves in the foot by changing the captain - Alastair Cook was replaced by Eoin Morgan - a short period before the World Cup and we didn't have a settled battling line-up.

"We have to look at the structure of our 50-over cricket and that has to stem from the coach and the way we want to play it."

The record-breaking run scoring of the 2015 World Cup demonstrates that 50-over cricket is emulating Twenty20 cricket in more ways than white balls and coloured clothing.

Yet few members of the England's one-day team take part in domestic T20 cricket, either at home or in high-profile tournaments like the Indian Premier League or Australia's Big Bash.

Since the beginning of 2013, Anderson has played four domestic T20 games anywhere in the world, Broad three, Ian Bell two and Root just one.

In a cricketing world of T20 globetrotters, only five of England's 15-man party have played in a T20 league outside the UK.

Some will point to the crowded nature of England's Test calendar, but players from other countries with similar schedules find time.

"We have to give our best players the chance to play in the right environment, to play in the IPL and Big Bash without restrictions," said former England fast bowler Steve Harmison.

"Unless we do that, the rest of the world will get better as we will stand still."

…and improve the English leagues

Making time for English players to take part in the Indian Premier League is fine in theory, but they have to be wanted. Nottinghamshire batsman Alex Hales, for example, went unsold at the latest IPL auction.

If that is uncontrollable, at least the England and Wales Cricket Board can aim for the highest possible standard of limited-overs cricket in the UK.

Counties only returned to playing 50-over matches in line with ODI playing conditions in 2014, having previously dieted on 40-over contests.

In addition, a protracted T20 season, taking place over the whole summer, means it is harder to attract the best international players to take part.

There have been frequent calls from the likes of Michael Vaughan and Kevin Pietersen to introduce a T20 franchise system similar to the IPL or Australian Big Bash.

"Ours seems low key, it doesn't mean quite as much. If you play in a more intense, competitive atmosphere, it stretches you and makes you a better player."

Moores has had success in the rebuilding of the England Test side. Of the XI that came from behind to earn a 3-1 series win against India last summer, six had not won a Test match before, let alone a series.

Moores's predecessor Andy Flower decided that the Test and limited-overs was too much for one man, and split the duties with Ashley Giles.

Giles had mixed results, taking England to the 2013 Champions Trophy final, but losing to the Netherlands as part of an early exit from the 2014 World T20 before leaving his role in April 2014.

If the job was to be split again, might England be able to attract a high-profile international name who could combine the role with a lucrative contract in the IPL or Big Bash?

"They need some foreign input," said BBC cricket correspondent Jonathan Agnew. "If it's only for limited-overs cricket, then they might have a chance of getting a big name like Stephen Fleming or Gary Kirsten.

"They need someone who understands English cricket, but also has coached elsewhere in the world and knows how modern one-day cricket is played."

However, Giles says a "foreign coach isn't necessarily the answer".

"Stephen Fleming is a very good man and he's done well in the IPL, but we need to look from top to bottom how we play our cricket," he said.

…and cut the nonsense

Moores has talked a lot about "analysing the game data".

Such an approach adds weight to claims that England rely too much on statistics, a charge denied by Moores, Morgan and ECB managing director Paul Downton.

If we are to give them the benefit of the doubt, then the line has to be drawn at some of the indecipherable phrases trotted out throughout the tournament.

Morgan, for example, said this before the Bangladesh game: "Moving forward, focusing on our strengths as a unit, individually, is very important."

Contrast that to the straight-talking of South Africa paceman Steyn: "If they need seven off the last over, I'll make sure they score three. If we need two wickets to win, I'll get those two wickets."

"They look like a team that plays to figures," he added. "Look at the teams who've set the World Cup alight.

"Brendon McCullum just goes out there and tries to wallop everyone everywhere."