England meet Sri Lanka in Wellington on Sunday knowing that victory will move them close to a place in the World Cup quarter-finals.

However, defeat would leave no margin for error in their final two group games against Bangladesh and Afghanistan.

Captain Eoin Morgan has suggested that England could make changes, with batsman Gary Ballance under most threat.

England have lost eight of their previous 12 one-day internationals against Sri Lanka, who would all but seal their last-eight spot with a win.

The match sees England return to the 'Cake Tin', the ground where they were thrashed by New Zealand last Saturday.

Yorkshire left-hander Ballance has made only 30 runs in three innings since being selected for England's opening match against Australia, his first ODI since September.

The decision to bat Ballance at three meant James Taylor, who had impressed in that slot, was pushed down to number six.

If Ballance is left out, Alex Hales could come in to bat in the top three, or all-rounder Ravi Bopara could go to six, with Taylor moving back up the order.

"Other teams have shown that aggressive play at the top can really reap the benefits and England have one of the most aggressive batsmen in the world in Alex Hales. He should be in at the top of the order."

In Kumar Sangakkara and Mahela Jayawardene, Sri Lanka have the only two batsmen in the tournament to have scored more than 1,000 runs in World Cups. Both scored centuries in their last innings.

Opener Tillakaratne Dilshan is also coming off the back of a hundred in the win against Bangladesh, while captain Angelo Mathews scored the second highest number of ODIs runs in 2014 - behind Sangakkara.

"For Sangakkara, I'd recommend bowling off-spin at him as early as possible. He's not a great starter against off-spin, especially if there's a bit of turn." 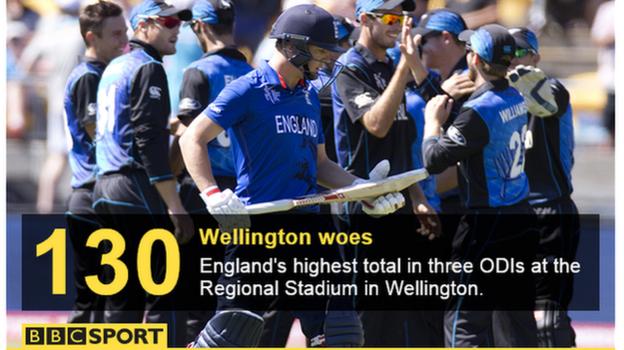 Sri Lanka have not only dominated recent one-day internationals, but they also won the Test series and one-off Twenty20 international in England last summer.

However, the ODI series that Mathews' side won 5-2 at the end of last year was played in Sri Lanka, with conditions much different to those expected in Wellington.

"I don't think Sri Lanka have any psychological hold on England," said Swann. "I couldn't see the logic of going to Sri Lanka to prepare for the World Cup.

"Recent form won't come in to it and England do have a team that could easily beat Sri Lanka."

'A must-win game for England'

England's results in their opening three matches have supported the pre-tournament notion that the game against Sri Lanka would be pivotal.

Defeats against Australia and New Zealand were as expected as the victory over Scotland. Now, a win against Sri Lanka would leave England in line to finish third in Pool A and, in theory, earn an easier quarter-final.

But defeat would have England sweating against minnows Afghanistan and Bangladesh, who earned an unexpected point thanks to an abandoned game with Australia. Remember, England lost to Bangladesh and Ireland four years ago.

"We always thought this would be a must-win game, and now it looks that way even more," said Swann.

"They have to win this to convince people they are genuine contenders and not just also-rans. The point that Bangladesh earned against Australia could haunt England, but they have to think that they aren't going to slip up."

England pace bowler Chris Woakes: "It's important that we show up against the big teams, we need to show how good we can. It's a big game because we've already lost two in the tournament."

Sri Lanka coach Marvan Atapattu: "England have a balanced side, but probably aren't happy with the way things have gone in the recent past. They have got some terrific batsmen in the first seven and, on their day, one of the best seam attacks."