He finished 162 not out from 66 balls as South Africa made 408-5, the second-highest total in World Cups.

Imran Tahir took 5-45 as West Indies were 151 all out to equal the heaviest World Cup defeat by runs.

Only last month, De Villiers hit the fastest-ever ODI hundred against the same team in Johannesburg, from 31 balls.

In that same innings, South Africa's captain also set the record for the fastest fifty in ODIs, from 16 balls. 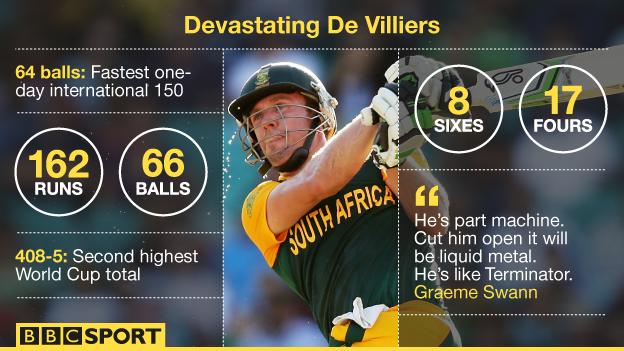 The Proteas made a sluggish start and were 87-1 after 20 overs, before De Villiers came to the crease in the 30th over with his side 146-3.

West Indies captain Jason Holder's last two overs went for 64 runs, with one over going for 34. De Villiers finished with 17 fours and eight sixes, more than he had dot balls.

South Africa's total was the highest by any team in Australia and only India's 413-5 against Bermuda at Port of Spain in 2007 (which also finished in a 257-run victory for India) is higher in World Cups.

Hashim Amla (65) and Faf du Plessis (62) also made fifties for South Africa, while Holder, who conceded just nine runs in his first five overs, finished with figures of 1-104 off 10, the most expensive in World Cup history.

West Indies opener Chris Gayle, who scored the first double-hundred in World Cups against Zimbabwe on Tuesday, scored only three before he was bowled by Kyle Abbott.

Only Dwayne Smith (31) and Holder (56) offered any real resistance as leg-spinner Tahir tore through the West Indies batting, becoming the first South African spinner to take five wickets in a World Cup match.

The records in full

"I had some stomach problems last night, I didn't eat much and had a very rough night. But the doctor gave me an injection and I was on my way.

"The credit must go to the guys up front for setting a base. Rilee [Rossouw] inspired me a bit with his effort and that affected how I played. After timing a few I got the momentum behind me.

"The main thing is to know your own game, know your strengths and weaknesses and when to home in on the former.

"I enjoyed myself out there. I earned the right to have a go at the bowlers in the latter stages of the innings."

Spare a thought for Holder

"I thought we did well early in the game with the ball and keeping the run-rate down but then it got away from us.

"If you take away De Villiers's innings it is a totally different score but we dropped chances and psychologically chasing 400 is a huge task.

"We have some areas we need to improve on. We are confident we can make the quarter-finals."

How the cricket world reacted

Former England captain Michael Vaughan: I guess they will just blame the modern bats... 162 off 66 balls from @ABdeVilliers17 #Genius

Former England spinner Graeme Swann: It's almost like witchcraft - he knows where the ball is going to be before the bowler knows it and he almost makes them put it there.

John Etheridge, The Sun's cricket correspondent: Nobody has ever batted like AB de Villiers. Such imagination, talent, dexterity and power. He can hit the ball anywhere he chooses.