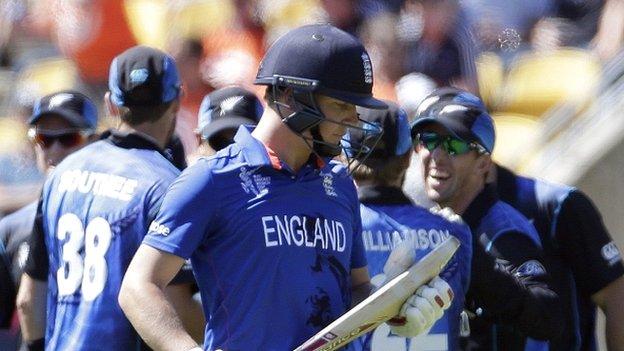 England could make changes for their World Cup Pool A game against Sri Lanka in Wellington on Sunday, according to captain Eoin Morgan.

Gary Ballance, who has scored 30 runs in three innings in the tournament, seems most vulnerable, with Alex Hales and Ravi Bopara in line to replace him.

"Alex and Ravi are two guys who train really hard. They are disappointed not to be playing but are eager to play."

Yorkshire left-hander Ballance had not played a one-day international for five months before being selected for the World Cup opener against Australia.

Drafted into the squad after Alastair Cook was removed as captain, the 25-year-old missed the tri-series with Australia and India because of a broken finger, but hit 57 in the final warm-up game against Pakistan.

"He's found it difficult, but he's been through difficult periods before so he will come out the other side," said Morgan.

England would be on the verge of a place in the quarter-finals with victory, but defeat would leave little room for error in their final two group games against Bangladesh and Afghanistan.

Morgan's side opened the tournament with heavy defeats by Australia and New Zealand before beating Scotland.

But despite that welcome 119-run victory, former captain Michael Vaughan concluded England are inflexible and predictable.

But Morgan rejected that claim, saying: "There is certainly a lot of flexibility in our side. All of my judgements are made on the field and there is flexibility in the batting order.

"There is no scripted formula of how we bowl. It's about adapting to conditions and the opposition that we play.

"It's run of the mill to be taking all this criticism. We are trying our best out here and I think if people realise that they'll appreciate it."

The Dublin-born left-hander also praised England coach Peter Moores, who has been questioned by both Vaughan and another former captain, Paul Collingwood.

"Peter has been awesome," said Morgan. "He brings a lot of energy and ideas.

"International cricket is about being one step ahead of the game. As a coach you're trying to find little edges here and there without taking the basics away. I think he's done that."