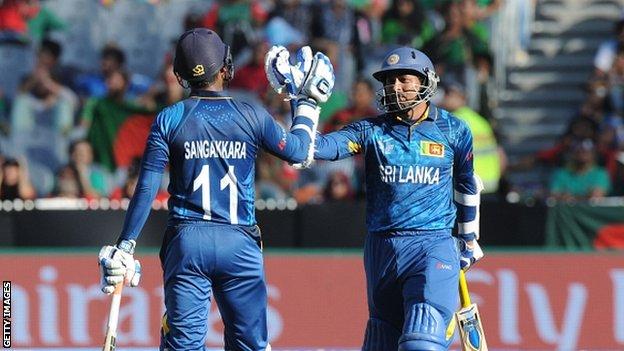 Tillakaratne Dilshan and Kumar Sangakkara scored hundreds as Sri Lanka beat Bangladesh by 92 runs in their World Cup Pool A clash in Melbourne.

Bangladesh were dismissed for 240 in 47 overs, Sabbir Rahman top-scoring with 53 and Lasith Malinga taking 3-35.

Sri Lanka have two wins and one defeat from three matches, while Bangladesh have one win, one defeat and one no result.

"Dilshan and Sangakkara were brilliant," said Sri Lanka captain Angelo Mathews. "They batted us through, took calculated risks, it was a great effort.

"We were slightly sloppy in the field and could have done better, but once you've got 300 on the board your bowlers can take chances. We're all ready for the England game [in Auckland on Saturday]." 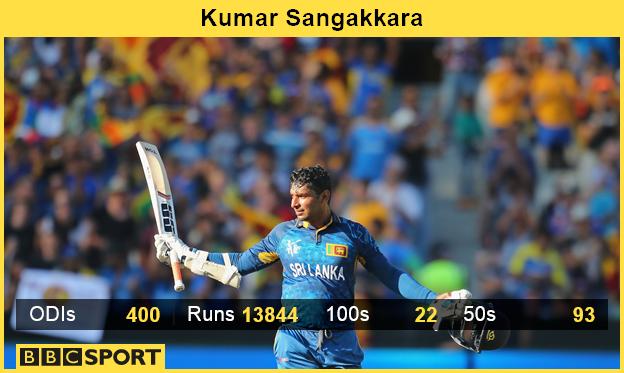 Bangladesh were dreadful in the field, reprieving Sri Lanka opening batsman Lahiru Thirimanne three times before he was finally dismissed for a charmed 52.

The Tigers' wicketkeeper Mushfiqur Rahim was particularly culpable, missing a stumping chance to dismiss Thirimanne and a run-out chance when Dilshan was well short of his ground in the 43rd over.

In reply, Bangladesh lost opener Tamim Iqbal from the second ball of the innings when he was bowled by seamer Malinga.

Shakib Al Hasan gave his team faint hope but after he was dismissed for an entertaining 46, Bangladesh's challenge petered out.

Sabbir's maiden ODI fifty came from 60 balls but Malinga did for him and Taskin in successive balls to wrap up the Bangladesh innings.

"Our bowlers weren't up to the mark and hopefully in the next match we will improve," said Bangladesh captain Mashrafe Mortaza.

Bangladesh face Scotland in a must-win encounter in Nelson next Wednesday.